THE LONELINESS OF THE LONG DISTANCE TERRORIST: THE FOREIGNER 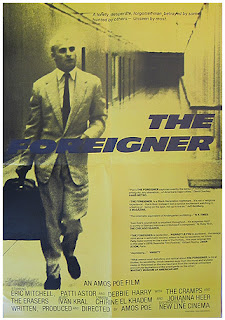 Halloween, 1977.  A blonde-haired man in a suit walks through an airport corridor.  He is alone, and for almost the entire length of this particular shot, there are no other people in the frame.  He's the anomic Aryan protagonist of Amos Poe's Kafkaesque The Foreigner (1978):  a German terrorist, Max Menace (Eric Mitchell), arriving in Manhattan on a mission.  What this mission is, he doesn't know, and he doesn't even have a contact.  Thus begins the No Wave auteur's exploration of "the foreigner who doesn't make it" in what the Israeli emigre filmmaker has called "the other side of the American dream."  The last thing this country needs, of course, is more imported terrorism; thus, I'm particularly pleased that Mr. Menace doesn't make it in Poe's elliptically intriguing pre-9/11 underground effort (which, incidentally, contains several striking shots of the Twin Towers).  The Foreigner is, nevertheless, the best film ever made for a mere five thousand dollars, and I can't seem to get it out of my head.

The well-dressed Mr. Menace--who, let the record show, seems harmless enough, and not entirely unsympathetic--wanders bemusedly through Soho and the West Village, encountering various unpleasant characters, all of whom are portrayed by the filmmaker's friends.  (Poe himself, whose bio reports that he was expelled from Ohio University in the late Sixties "for participating in burning down the administration building during a sit-in," and who is probably best known for directing Animotion's 1984 "Obsession" video, cameos here as someone named Amos Nitrate.)  Menace holes up in the Chelsea Hotel, where, in a salutary example of reflexive synchronicity--Poe, after all, co-directed the first punk documentary, The Blank Generation [1975], with musician Ivan Kral--he watches an alarmist television program, featuring the Damned in concert, on the nascent UK punk movement, whose narrator laments that the genre's "fans have rejected all values" and "are anti-everything," and worries about such nihilism spreading to the United States, which plainly has enough nihilism of its own.  "If they can't do anything else," the narrator despairs of these musical malcontents, "they can destroy.  They count it as an accomplishment."  The cultural gauntlet has been thrown.

Menace is trailed by sundry goons, as well as by martini-sipping private investigator Fili Harlow (the buxom Patti Astor), who's been hired for the entire price of The Foreigner's budget by dominatrix-suited Doll (the late Anya Phillips, manager/girlfriend of No Wave alto saxophonist James Chance).  No one else wants anything to do with him, however, so he spends a fair amount of time recording his gloomy thoughts, which include quotations from Novalis and Herman Hesse, on a portable cassette player.  "I had nothing before I got here," Menace complains.  "Now I have delusions.  I seem to be surrounded by events to which I am only a spectator."  He sinks into solipsism:  "I'm so wrapped up into myself that I hardly listen to anything.  I skew over all the sensations and feelings I have--except the one of being lonely, in which I seem to be taking pleasure."  Such, alas, are the sorrows of the Terrorist in Autumn.

Attempting to pull himself out of his stupor, Menace rides a tourist boat past the Statue of Liberty, where Harlow observes him being harassed by two goons.  He's subsequently picked up by a schizoid woman named Zazu Weather (Terens Severine) who imprisons and starves him in her apartment.  ("You're filthy," she tells him.  "I like that.")  The demented creature even ties him up so tightly that he passes out, but she is unexpectedly shot to death, not a moment too soon for my taste, by a Mysterious Someone--we glimpse only the killer's gloved hand--and Menace manages to free himself when he regains consciousness.  He journeys through the city's grindhouse district to encounter Blondie's Deborah Harry in an alley; her character, Dee Trik, warbles Marlene Dietrich tunes auf deutsch for the price of cigarettes.  Later, Menace is whipped and slashed by thugs (impersonated by the great psychobilly band the Cramps) at CBGB while the Erasers belt out Iggy Pop and David Bowie's "Funtime."

The injured and now intoxicated terrorist, his nice suit in shreds, seeks shelter at the Hotel Providence, a ludicrously-misnamed fleapit.  Harlow, meanwhile, ventures into Doll's office building, only to discover her client's corpse on the floor.  The same gloved hand delivers a karate chop to the back of her neck; when she finally comes to, Doll's body is gone.  The investigator writes her telephone number on a slip of paper and slides it under the door of Menace's room, telling him "I don't know what you're up to, but I'm the only one who can get you out of this mess."  Menace doesn't respond, but before you know it he's frantically dashing through the streets while more goons pursue him in their car.  He finally calls Harlow from a cafe, declaring he's "at the end of my rope," then hightails it to Battery Park.  There two gunmen--one of them gloved--await him, shooting him multiple times in the back as he runs past the East Coast Memorial eagle statue.  Menace, having failed to integrate into the country's "jungleland" (the director's term, not mine), staggers forward to die hanging on a rail facing New York Harbor with Lady Liberty in the symbolic distance.

Poe accurately described The Foreigner as "an anti-homage" to the Nouvelle Vague, "tel[ling] a story by leaving out the facts."  He enthusiastically deconstructs the noir and spy genres, much as Jean-Luc Godard did to the science fiction film with his dystopian Alphaville: A Strange Adventure of Lemmy Caution (1965).  From a purely visual standpoint, The Foreigner seems to inhabit Forties, Sixties, and futurist cinemascapes simultaneously.  Attitudinallly, it's an entertaining, sometimes exasperating, document of its day--a post-punk time capsule--made just before the Cinema of Transgression kicked into high gear with such misfit artistes as Nick Zedd and Beth B.  The acting is largely amateurish, innocent bystanders gape at Chirine El Khadem's camera, and an extended sequence of several leather-jacketed goofballs assembled while their ringleader recites pornographic gibberish temporarily grinds the film to a halt.  Khadem's black-and-white lens occasionally wobbles in the wind, but even so it captures many arresting images:  Menace taking a taxi through the antiseptically-lit Holland Tunnel; the haloed blur of streetlights and car headlamps; a steaming manhole lid; and the Twin Towers themselves, which when filmed from below paradoxically resemble colossal subway grates--in fact, Manhattan is photographed in such a fashion that, patrolling at street level, its citizens appear to inhabit the floor of a jungle.  There are stylistic nods to Jules Dassin's neorealist police procedural The Naked City (1948), as well as a tiny exploding firecracker in someone's belt loop which comically recalls the Roman candle phallus in Kenneth Anger's Fireworks (1947).  The film was shot in sequence because actor Mitchell possessed only one suit, and the Cramp's Lux Interior really did slash him at CBGB, but fortunately no buildings were burned down in the process.

The Foreigner was released on DVD by Eclectic in 2001, though I've not seen that edition, autographed copies of which are available for purchase at Poe's website.  TCM recently aired the one-hundred-and-one minute picture as part of its Underground series, where I gratefully recorded it.  The fullscreen sixteen-millimeter print is scratched and grainy, and will never look like a penny more than the five grand that Poe repaid, at a monthly rate of $129, to Merchants Bank of New York.  (The bank refused to loan him money for the project, so he borrowed funds for a $5000 car instead.)  The sound is primitive, but Kral's richly minimalist score, incorporating Ry Cooder-ish slide guitar and icy electronic ambience, is well-recorded; it merits a release of its own.  "'When we dream that we dream,'" Menace channels Novalis in voice-over, "'we are beginning to wake up.'"  Poe's film is every bit as self-referential as any dream, but The Foreigner's peculiar strength is that it doesn't awaken.  It's a slumbering punk princess of a picture, a movie made for midnight.  Here's the trailer.

THE RETURN OF THE THIN WHITE DUKE: WHERE ARE WE NOW?

David Bowie has emerged from his long musical exile with a haunting new single, "Where Are We Now?", which the artist unleashed on an unsuspecting world today on the occasion of his sixty-sixth birthday.  The song, a preview of his upcoming album The Next Day, is an elegiac ballad with subdued piano chords largely recalling Bowie's so-called "Berlin Trilogy" with recording technologist Brian Eno (Low [1977], "Heroes" [1977], and Lodger [1979]).  The lyrics reference specific parts of the German capital city, while the accompanying video, directed by multimedia and installation artist Tony Oursler, contains footage shot by Bowie during his tenure in Berlin, where the formerly "zonked out of my mind" musician had temporarily relocated from Los Angeles to live above an auto repair shop, "[become] a person again," and compose absolutely stunning work in the process of healing himself.  The Next Day marks Bowie's first album in the decade since 2003's Reality, and is produced by that record's Tony Visconti, who also toiled on the aforementioned trilogy and is arguably Bowie's greatest producer.  It's an unexpected pleasure to see this titan making music again.  A Very Happy Birthday to one of my cultural heroes, with or without quotation marks.
Posted by James Pagan at 5:03 PM