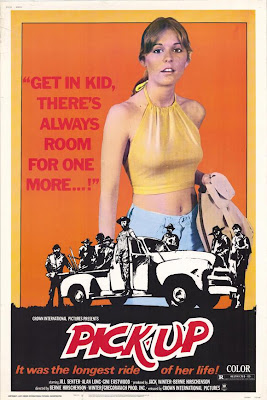 "The locus of pastoral," scholar Edward L. Ruhe observed, "is at the margin of civilization." Bernard Hirschenson's Florida-lensed Pick-Up (1975) may not be precisely situated at that liberatory margin, but it's certainly marginal, and surprisingly magical, enough in all its grindhouse mini-grandeur. The Crown International release is an awkwardly dreamy/dreamily awkward exploration and exploitation of the deep human desire for pastoral, as well as the more sensational joys of going completely skyclad. Paul Fussell once asked, "What could more conveniently constitute an antidote to civilization and a celebration of Golden Age honesty, freedom, and simplicity than casting off your dearest disguises?" What, indeed, especially when there's money to be made at the nearest drive-in?


The film opens ostentatiously enough with a close-up of male lead Alan Long's belt buckle as he slowly undoes the band to render his water by the side of a mobile bus home which, in real life, was the vehicle for Richard Nixon's 1972 re-election campaign in the Sunshine State. The audience is, however, denied an appreciation of his, and his character Chuck's, mighty member until later in the picture, but of course that's not really why anyone's watching the film. Female pulchritude is the name of this game, herein represented in the shapely forms of two hippie women, Carol (Jill Senter) and Maureen (Gini Eastwood, a onetime recording artist for Columbia Record's Tower subsidiary), observing Chuck from their vantage point in a wheat field. The lustful and childlike Carol, who's traveling with a stuffed cat, wants to hitch a ride with the feather-haired stud, who's delivering the bus to Tallahassee, but moody Maureen isn't so sure--Chuck's an Aries and, man, something just doesn't feel right. Carol urges her to come along on this "bad trip," anyway; Maureen assents and soon the trio are tooling down the highway while Carol does a suggestive dance for some good old boys in the pickup truck in front of them.


She and Chuck immediately hit it off while Maureen reads the Tarot; whenever Mo does this, the final card she selects is invariably Death. Maureen, as you've doubtless discerned, is a real downer whose emotional problems stem from her molestation, even though she doesn't remotely resemble a boy, by a Catholic priest (writer/producer Jack Winter, who stepped in when a real padre suddenly "couldn't make it") in an unintentionally comical flashback, and she seeks to "avoid animal passions." Animal passions, of course, are what Pick-Up's all about. Chuck is forced to detour through the Everglades when a hurricane roars in, and soon the imbecile's mired the bus in the mud. Cue naked romps through the swamp for Carol and Chuck, while Maureen remains behind to encounter, out of the blue, Pythia, a black priestess of Apollo (Bess Douglas, the picture's makeup artist) who presents her with a phallic staff to defend the Olympian deity against the Assyrian and Babylonian demon god Pazuzu (which, along with Swamp Lord, also served as a working title for the film). Maureen next discovers a stone altar to writhe nude upon, and the picture's pace improves considerably.


While Chuck and Carol are casting off their dearest disguises, the new priestess is visited by Pazuzu in the person of the satanic Senator Max (comedian Don Penny, who by the time of filming was writing speeches and gags for Nixon and Gerald Ford), who's stumping for re-election in some rather out-of-the-way places. When Maureen informs him that she's not from Florida, but from California, the senator (who's "1,000%" on either side of any conceivable issue) departs with an absurd line about big avocados. Her next visitor is a sinister clown who offers her one of his colored balloons. When Maureen gets a look at the face behind the clown's mask--we subliminally glimpse a red-painted visage and glowing green eyes--she shrieks and retreats to the bus.


Meanwhile, it's getting to be dinnertime, so young Featherhair kills a boar with his bow and arrow. The women aren't exactly thrilled at his actions, but food is food in this particular civilizational margin. Maureen finds herself inexorably drawn to Chuck; while the two are finally off making the beast with two backs, Carol wanders around by herself, only to be assaulted by the yahoos from earlier. Chuck and Maureen return to discover her dead arm--still clutching that stuffed cat--protruding from the swamp, and suddenly we're back at the beginning of the picture. Everything we've witnessed is the premonitory erotic rebirth of Maureen, for which Carol must be immolated. "Aries--a beautiful Aries!" Maureen exclaims to her companion, and the story begins for real as the bus pulls away, while the creepy clown's balloons ascend to the heavens.


Winter states in a recent interview on the film's MySpace page that he was "fascinated with the myth of Dolph and the Apollo oracle. What better setting than the Everglades to capture the mythical theme in an ominous setting?" The sun god brings not only light but order to the Dionysian world while rescuing Maureen from the repressed and hypocritical trappings of Judeo-Christianity, especially the Catholic brand. The daemonic demands a ritual sacrifice, however, before all that Golden Age honesty, freedom, and simplicity can be regained. Pazuzu, fresh from his mischievous turn tormenting Linda Blair in William Friedkin's blockbusting adaptation of William Peter Blatty's The Exorcist (1973), really seemed to get around in the Me Decade.


In its employment of erotic dreamscaping, the film unexpectedly incorporates some of French auteur Jean Rollin's artful obsessions, minus the director's vampiric lesbian interludes. Greek and Mesopotamian myths are rather haphazardly tossed together in this neopagan salad, but then so is Pick-Up itself, originally envisioned as it was by its creators as "Easy Rider meets Fellini." At one point Chuck Mangione was interested in scoring the picture (a task ultimately accomplished by Patrick Adams and Michael Rod; tabla man Badal Roy's main theme, incidentally, is most impressive), but the flugelhornist's agent quickly put the kibosh on that. According to Winter, the attack of the yahoos--recruited from attendants at a high school football match--was so energetic that it resulted in actress Senter's fearful retreat to the magic bus, where "she sat trembling for some time." Eastwood reports that her altar performance was accidentally witnessed by "three or four poachers"; the film crew also encountered "Cuban commandos" preparing for a "counter revolution" which never materialized. "That kind of thing was going on in the Glades in those days," the actress remembers of this unsettling event.


Pick-Up (the generic title was imposed by the distributor) has appeared on several BCI compilations; it's the first film in the label's 2007 Drive-In Cult Classics Vol. 1, which Mill Creek Entertainment subsequently reissued when BCI went belly-up. The seventy-seven minute feature appears in its original 1.78:1 ratio and looks fine; it's paired with Hikmet Avedis' 1974 melodrama The Teacher. Crown International's little antidote to civilization is presented with eight chapter stops and zero bonus features. Mill Creek's keep case incorrectly lists the picture's release date as 1980, a year it was undoubtedly still playing drive-ins.  Here's the trailer.