I'LL BE SEEING YOU, SUSAN: THE PROWLER 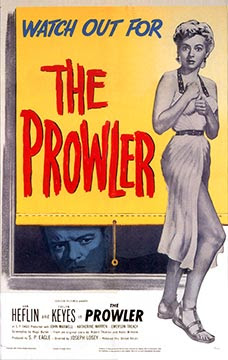 The career of Joseph Losey (1909-1984) is traditionally divided into two discrete halves: his early years as a Hollywood director, and his more celebrated resurgence in Europe as a blacklisted expatriate and arthouse auteur. The latter period produced some astonishing work, particularly with Losey's greatest leading man, Dirk Bogarde (The Servant [1963], Accident [1967]; both films were also collaborations with playwright Harold Pinter), as well as an amazing Hammer science fiction drama (These Are the Damned [1961]), and several intriguing misfires (Modesty Blaise [1966, again with Sir Dirk], Figures in a Landscape [1972]). Losey's earlier period is, however, if not equally accomplished, at least extremely impressive--and, for my money, too often overlooked--from his allegorical fantasy The Boy With Green Hair (1947) to his 1951 noir The Prowler.


A sultry blonde, naked except for a towel, gasps and pulls the shade when she spots a peeping tom--whom, significantly, the viewer never sees--in her yard. Susan Gilvray (Evelyn Keyes) phones the LAPD, and Officers Webb Garwood (Van Heflin) and Bud Crocker (John Maxwell) investigate. The tom is never caught, but bachelor Garwood is immediately drawn to the woman, so much so that he later pays a call, still in uniform, after his shift to see how she's doing. It transpires that the two hail from Terre Haute, where Garwood was his high school's star basketball center. He claims to have endured "lousy breaks" ever since those glorious hoop days (a public quarrel with his college coach cost him his athletic scholarship), but, despite his bitterness, the officer dreams of achieving middle-class respectability by owning a Las Vegas motor court. Susan, herself once an aspiring starlet, is unhappily married to John Gilvray (Sherry Hall), a radio disc jockey (blacklisted scenarist Dalton Trumbo provides the character's on-air voice) who signs off his evening broadcasts with "I'll be seeing you, Susan"--and before you can say James Cain, Garwood's moving in on the wife, despite her initial, thoroughly unconvincing protestations. Gilvray, whose sterility has frustrated Susan's desire for a child, quits his job when he suspects that his wife's two-timing him (she discloses to her lover that he's threatened to kill her), and Garwood breaks up with the woman, purely in an attempt to further wrap her around his trigger finger. The officer has secretly examined her husband's will; now he plots the man's murder by pretending to be a prowler, luring Gilvray outside to check for the intruder, then gunning him down.


Garwood uses Gilvray's pistol to graze his own arm, making the crime appear to be self-defense. The inquest jury clears him with a verdict of accidental homicide, even though the devastated Susan accuses him at the hearing of deliberately killing her husband--she is, however, loath to admit her adulterous involvement with the officer. Deep down, she still wants Garwood, so much so that wedding bells ring when he gets back in touch and assures her that Gilvray's death was unintentional. Furthermore, the champion sharpshooting officer has resigned from the force, piously informing Susan that "I couldn't bring myself to touch a gun again as long as I live." Garwood uses the will money to purchase his dream property for the couple, but there's a problem: Susan reveals she's four months pregnant with the officer's baby, and the two have officially claimed not to have had any romantic contact with each other before Garwood plugged Gilvray--in fact, the dead man's brother William (Emerson Treacy) has previously assured Garwood of the radio host's sterility. Panic sets in, and Garwood holes up with Susan in the ghost town of Calico ("the tail-end of Creation"), enlisting a local doctor (Wheaton Chambers) to deliver the premature baby, as well as scheming to murder the physician so he won't talk. Susan, however, realizes Garwood's plan when she glimpses her new husband's pistol, and warns the doctor after she gives birth, prompting him to flee with the infant to alert the local police. Garwood races after him, but who should he run into--in a frenzied, near-slapstick sequence--but his former partner Crocker and Crocker's wife (Katherine Warren), who are returning from a geology holiday. The authorities arrive to arrest Garwood, who's fatally wounded fleeing from them to the top of a hill.

It's grim stuff (quite frankly, I half-expected the couple's child to be born dead), albeit amusingly so as Garwood embarks on his idiotic scheme. Heflin specialized in obsessive, deeply-flawed characters, as in his superb turn three years earlier as the dubious war hero of Fred Zinnemann's Act of Violence. His Garwood's a cunning sociopath contriving to Make Something Of Himself, but Heflin never overplays the officer, tempering his ruthlessness with an arachnid charm that, as his given name suggests, easily ensnares the impressionable, dimwitted Susan. Keyes' character is alternately vulnerable and self-centered (she pointedly feels more guilt over her adultery than pain over her husband's death); these two richly deserve each other, even if they never achieve the grand operatic excesses of John Garfield and Lana Turner, or, for that matter, Fred MacMurray and Barbara Stanwyck. Trumbo's script (credited to "Hugo Butler," and drawn from a story by Robert Thoeren and Hans Wilhelm) darkly satirizes the relentless obsession with status that permeates American society, as Garwood will do anything to achieve his goal, and is painfully self-conscious that his life hasn't turned out the way he planned. (When Susan tells him that, as a teenager, she used to clip his photo out of the newspaper and wonders, "Who'd ever have thought--," the officer immediately interrupts, "That I'd turn out to be some dumb cop, huh?") Garwood's the type who can never stop wanting more; indeed, he blatantly ogles a comely female guest at the couple's motor court as her older husband spirits her from his sight.

The scenario is well-structured (aside, that is, from the implausibility of Garwood and Susan's unholy matrimony not raising the Gilvray family's eyebrows), allowing Trumbo and Losey to make great mischief with Gilvray's broadcasts, which offer an unconsciously ironic commentary on his wife's infidelity. "That was 'Stolen Fun,'" says the host of the disc he's just spun while Garwood and Susan lounge at the couple's hacienda, "and what could be sweeter'n that?" Gilvray's extensive album collection is actually the collected recordings of his programs, preserved "so he can improve his diction," Susan confides. When, tucked away at the ghost town, Garwood plays for Susan what he thinks is a regular album, it turns out to be yet another Gilvray broadcast, a beyond-the-grave signal ("I'll be seeing you, Susan") that the couple's future is running out like sand into the desert around them.


Two-time Oscar winner Arthur C. Miller's camerawork is splendidly claustrophobic, employing stygian lighting during Garwood and Susan's dance in the Gilvrays' living room, as if the couple are literally waltzing into darkness; the energy between the two leads sizzles with barely-suppressed sexual tension. Another magnificently-composed moment is the shot of Garwood shining his patrol car's headlamps into the couple's bedroom to summon Susan as she sits up in panic. (It's Old Hollywood, of course, so husbands and wives sleep chastely in separate beds.) By the time Garwood scrambles dustily up the hill, Miller's tight framing suggests he's scaling a smoldering volcano to some classical doom. Losey's direction is equally tight, and cultists will be interested to know that his assistant on this picture was Robert Aldrich, who four years later would helm one of the greatest of all noirs, Kiss Me Deadly.


Regrettably, The Prowler remains unavailable on home video, but Turner Classic Movies premiered a handsome fullscreen print of this ninety-two minute gem--lovingly restored by the heroic preservationists at the UCLA Film & Television Archive, and funded by the Film Noir Foundation and the Stanford Theatre Foundation (with a "special thanks" to the Demon Dog of American Crime Fiction himself, James Ellroy)--in September. Happily, TCM will air this classic Losey thriller again on Saturday, November 13 at 8:30am EST, so, as the picture's poster instructs, watch out for The Prowler.