WAR-DOGS OF THE DEEP: TERROR BENEATH THE SEA 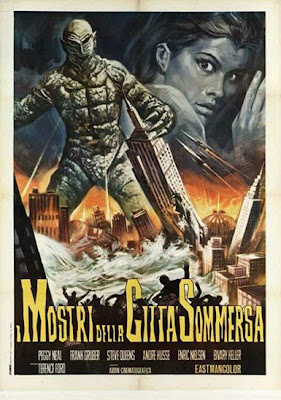 Hajime Sato's Terror Beneath the Sea (1966), originally titled Kaitei Daisenso, was never released theatrically in the U.S., debuting instead on television five years later, but I don't remember it playing on any of the stations in my neck of the woods. Legend has it that the film was intended for the small screen by producers Walter Manley and Ivan Reiner--hence its predominantly Western central casting--who lensed it at Toei Studios for economical exotica. The picture ultimately unreeled in Japanese, and at the very least Italian, cinemas (as indicated by the above poster), to no appreciable damage that I can determine. Dark Sky Films brought this cartoonish fantasia to DVD in 2005 in a colorful, albeit no-frills, transfer. It's chock-full of outrageous villainy and preposterous gizmos, and positively zips along at seventy-nine minutes.


Reporters Ken Abe (Shinichi "Sonny" Chiba) and Jenny Gleason (Peggy Neal) assemble with other journalists aboard a U.S. submarine for a demonstration of the Navy's new "Bloodhound" homing torpedo off the coast of Japan. During this exhibition of American might, the shadow of what everyone assumes is a man passes across the sub's monitor; because the vessel is at such a great depth, the commanding officer, Brown (Franz Gruber), suggests the figure is a corpse. Pacific Command cannot locate the body, however, and the next thing you know Ken and Jenny are scuba diving for it. Jenny encounters an amphibian humanoid, but although she has the presence of mind to photograph the creature, accidentally drops her camera. By the time Ken comes to her aid, the gillman is long gone and Commander Brown's skeptical about the whole incident. The reporters return to search for Jenny's camera, winding up in a cavern where several of the silver-scaled beings take them captive. Abe and Jenny are held in an immense undersea city, three thousand feet below the surface, by totalitarian mastermind Dr. Rufus Moore (Erik Nielson), a rascal in Roy Orbison wraparounds who's recruited various eggheads to create a race of "water cyborgs" from human beings. The Bad Doctor's "a hundred years ahead of" modern science, and he attempts to convert Ken to his cause because the journalist is a "specialist in propaganda." (How this makes Abe significantly different from other reporters is, of course, difficult to distinguish.)

Ken refuses to help Moore in his plans for the futuristic city, so the supervillain gives the Fourth Estate duo the water cyborg treatment. He also abducts the couple's scientist friend, Dr. Howard (Andrew Hughes), but the elderly gentleman isn't very cooperative, either. Meanwhile, Commander Brown sets out in a sub to find the missing reporters, stumbling in the process across a tremendous number of atomic waste barrels, which Moore is using to power his city. The undersea tyrants engage Brown in a battle, but the commander means business. One of his missiles damages the control circuit board for the cyborgs, causing them to go berserk and attack Moore and his henchmen. Ken and Jenny, who are in the early stages of the transformation, scramble out of the disintegrating city before the Big Boom, depriving the wounded Moore of his escape vessel, and Dr. Howard reverses the water cyborg process so that the reporters can once again scuba dive in pristine condition.

Terror Beneath the Sea is fiendishly entertaining, from its fierce overacting (particularly Neal, who shrieks in the grand B-movie fashion, and Gruber, who delivers his lines as if be can barely contain his intensity) to the flamboyant electronic lounge score by Shonsuke Kikuchi, who composed several Gamera soundtracks. (Dark Sky's dubbed edition features the velvet voice of Brent Morrison in several, if not most, male roles.) Kohichi Ohtsu's script, plainly inspired by Jacques Tourneur's then-recent War-Gods of the Deep (1965), contains such priceless lines as "Let's just say the alternative won't be too pleasant" and "Not the X-4! You'll blow up the whole ocean!" Sato, a Mario Bava disciple masquerading here as "Terence Ford," later directed the incredible Goke--Bodysnatcher From Hell (1969), though Terror--while as ambitious as its low budget allows--lacks that picture's apocalyptic frissons. Martial artist Chiba sports a notable unibrow; Neal, who later appeared with Gruber in Kazui Nihonmatsu's wonderfully wacko The X From Outer Space (1967), is beautiful but bland--at least until she screeches. The picture's most amusing scenes involve her hysterical reactions to her extremely mild transformation: the reporters merely appear to have gel slathered on their cheeks and hands, but the actress carries on as if she's experiencing full-blown Cronenbergian body horror. The film opens on a freeze frame of the American title, callously omitting the screenwriter's name, and several credits actually overlap, as if the producers are in a hurry to get things going. I suppose I would be, too.


Dark Sky's disc, which is letterboxed at an anamorphically-enhanced 1.85:1, brings out the Bava-esque spectrum of Kazuo Shimomura's cinematography. Several sources cite a six-minutes-longer Japanese version, but, although the story jumps around manically, nothing really seems to be missing, unless it involves an elucidation of the two reporters' relationship. (They appear to be lovers, but this is never spelled out; perhaps the Asian male/Caucasian female pairing was taboo for the time, Alain Resnais' Hiroshima Mon Amour [1959] notwithstanding.) There's no trailer, not even a Japanese one. The disc contains optional English subtitles, and Dark Sky's lurid yellow keep case is one of the label's more memorable designs.
Posted by James Pagan at 8:28 PM