BLACK SEAS OF INFINITY: THE CALL OF CTHULHU 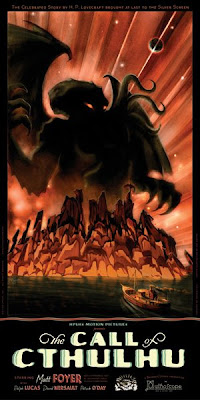 Howard Phillips Lovecraft (1890-1937) was the greatest writer to emerge from the American horror pulps, but faithful adaptations of his dark fantasies have, alas, been few and far between. Roger Corman's The Haunted Palace (1963) masqueraded as another of the director's Edgar Allan Poe thrillers, but was actually an estimable reworking of Lovecraft's novella, The Case of Charles Dexter Ward. Other efforts have been considerably less inspired (David Greene's The Shuttered Room [1967], from an August Derleth "collaboration," in especial), while one of the better Lovecraft-derived pictures, Stuart Gordon's delightfully outrageous Re-Animator (1985), feels less like the Weird Tales wizard and more like Frank Henenlotter. The Call of Cthulhu is, along with At the Mountains of Madness, one of the Gentleman from Providence's two most canonical works, and the H.P. Lovecraft Society's 2005 production of this classic chiller truly serves the author well. It's by far the best filmed treatment of his work, and--in a shrewd stylistic move--appears to arrive from the year (1926) in which the antiquarian composed his story for J.C. Henneberger's legendary magazine.


According to the insert sheet accompanying the Society's Microcinema DVD, the association arose in 1987 as a circle of live-action Lovecraftian role-playing gamers. The Society has progressed from publishing a newsletter to operating a website and producing radio and motion picture adaptations. Here the filmmakers employ the miracle of "Mythoscope" to recreate the look and the texture of silent movies, utilizing speckles and the occasional writhing projector gate hair to suggest ancient silver nitrate, not terribly dissimilar to Woody Allen's tactics on behalf of his magnificent mockumentary, Zelig (1983). The trick photography, forced perspective, and stop-motion animation of bygone times combine with modern digital compositing in a startlingly vivid feature that runs rings around much of today's depressingly reflexive "imaginative" cinema.

"The most merciful thing in the world, I think," Lovecraft's Francis Wayland Thurston begins his bleak narrative, "is the inability of the human mind to correlate all its contents. We live on a placid island of ignorance in the midst of black seas of infinity, and it was not meant that we should voyage far." Lovecraft created a baneful macrocosmos which is largely and happily hidden from our sight, but remains ready to burst through at any moment. His abominable alien zones are populated by unspeakable interstellar entities--the Great Old Ones--whom human beings, in all our intellectual limitations, mistake for deities and demons. In his wildly entertaining The Cult of Alien Gods: H.P. Lovecraft and Extraterrestrial Pop Culture, Jason Colavito credits the fantasist with inadvertently inspiring the notorious "ancient astronaut" subgenre of pseudoscience by synthesizing the "Golden Age" esotericism-slash-humbug of Madame Helena Blavatsky, Ignatius Donnelly, and Charles Fort with Arthur Machen's yarns of "primal mysteries." Lovecraft's literary mixture remains an intoxicating brew which has, ironically but predictably, clouded the minds of many occultists and conspiracy theorists, who insist, for example, that his entirely fictitious grimoire, the Necronomicon, is the Real Deal. Ergo, the contrivances of such confidence men as Erich von Daniken dishearteningly reflect humanity's desperation to remain the spiritual center of the universe in the depths of our materialistic malaise, but Lovecraft will have none of that wishful thinking; if anything, Colovito argues, he "preached a cosmic indifference, where the aliens were utterly unconcerned with mankind, where humanity was simply a cog in the great machine that was the mindless cosmos." The Call of Cthulhu, well-adapted by Sean Branney under Andrew Leman's accomplished direction, definitively dramatizes the author's keen sense of existential dread.

Thurston (nameless in this version and well-played by Matt Foyer) is shaken by the disclosures in his late great-uncle George Gammell Angell's (Ralph Lucas) papers, which reveal an alternative reality beyond any anyone's most demented imaginings. Angell's first manuscript, "The Horror in the City," documents the Semitic Languages professor's encounters with a disturbed artist named Henry Anthony Wilcox (Chad Fifer, who also contributed to the film's vigorous symphonic score), who has fashioned a bas-relief of a mysterious creature called Cthulhu, which has come to him in a successive series of nightmares. Not coincidentally, the planet is plagued during the course of the artist's dreams by everything from earthquakes to riots. ("VOODOO ORGIES MULTIPLY IN HAYTI" and "HYSTERICAL LEVANTINES IN MIDNIGHT MOB," shriek headlines in a good old-fashioned newspaper montage.)

The second document records the exploits nearly two decades earlier of wax-mustachioed Inspector John Raymond Legrasse (David Mersault) as he trails a murderous doomsday cult through the Louisiana swamps and recovers a sculpture of a weird being with a tentacled face--which an anxious Professor William Channing Webb (Barry Lynch) recognizes when Legrasse reveals the icon to several scholars, Angell among them, at a 1908 gathering of the American Archaeological Society in an effort to learn more about the statue. Webb had in his young manhood lost an eye to an Esquimaux shaman (Dan Novy) for daring to touch a similar statue, and the Inspector recounts his brutal-but-futile interrogation of Castro (Clarence Henry Hunt), a grotesque mestizo, who warns the authorities that "Great Cthulhu waits dreaming in the sunken city of R'lyeh. The stars will again be right, and He shall return."

These sequences are quite impressive, laying a firm foundation for the third manuscript, which Angell's grandnephew himself tracks down after reading by chance of a bizarre incident in the Sydney Bulletin. The pages relate the story of First Mate Gustaf Johansen (Patrick O'Day) of the Emma, whose tempest-tossed New Zealand schooner encounters a derelict fishing trawler, the Alert, in the South Pacific. The crew members, whose own vessel is flooded, commandeer the trawler and learn from the ship's log that its missing sailors had set course for an unknown island in nearby uncharted waters. They also discover a box containing a Cthulhu icon and a severed finger. The ship steers to the island, which is dominated by a seemingly abandoned and--to borrow a favorite Lovecraft adjective, Cyclopean--city whose geometric structures are insanely non-Euclidean. Cthulhu waits below, of course, and when he emerges from his portal the colossal, squid-faced, clawed extraterrestrial makes short work of the men. Johansen escapes with sailor Briden (Matthew Q. Fahey) to the Emma, but that scarcely prevents Cthulhu from pursuing them. The gargantuan charges into the ocean as the desperate Johansen rams the creature, which howls with rage and retreats underwater. When the First Mate turns around, his completely unhinged shipmate has expired, extravagantly bleeding from his eyelids. Soon he himself will be dead, along with Angell, Legrasse, and even poor Thurston. In the denouement, the grandnephew (who's been recounting these incidents from an asylum--Thurston, however, is not institutionalized in Lovecraft's novella) urges his doctor (John Bolen) to destroy the papers. He has, like his predecessors, voyaged too far in those black seas, but there's the implication that another excursion into the unknown, on the part of his auditor, will soon begin. As Thurston so memorably puts it at the conclusion of his narrative, "Some day the piecing together of dissociated knowledge will open such terrifying vistas of reality, and our frightful position therein, that we shall either go mad from the revelation or flee to the peace and safety of a new dark age."

Cthulhu's brief appearance is striking; although he exhibits the herki-jerkiness of such stop-motion creatures as those of The Lost World (1925) and King Kong (1933), he also inspires the shivering awe that audiences must have felt upon seeing those celluloid wonders so many decades ago. The Caligari-esque design of R'lyeh (Lovecraft's Atlantis), which Expressionistically renders the abode of a being outside our own space-time continuum, is especially admirable, constructed as it is of scaffolding, solid cardboard, and used canvas. (Black-and-white perfectly serves this film, as color would only emphasize its low-budget sets.) Another noteworthy sequence is Professor Angell's visit to the Fleur-de-Lis building in Providence in search of Wilcox: the structure is specifically cited in Lovecraft's story, and displays the same exteriors it did when he wrote it; through digital magic and the use of models, the filmmakers seamlessly suggest that actor Lucas has somehow traveled back in time. Leman's outstanding cast sport the androgynous pancake of their silent pioneers, while adeptly communicating the theatrics of those period players.

Microcinema's fullscreen DVD (which sternly warns that "violators of HPLS copyrights may have their eyes plucked out by byakhee as they sleep," so beware, ye pirates) contains several interesting supplements. "Hearing 'The Call'" (25 minutes) offers behind-the-scenes footage and interviews with cast and crew members. Cinematographer/editor David Robertson admits that he possessed only "a very peripheral knowledge of Lovecraft" before tackling the project (he "knew the name from high school and some of the geekier kids"), and confesses he's never read the author. Deleted material includes green- and blue-screen footage of the Cthulhu model, and improvisations from the various actors, most notably Fifer, who memorably channels Dwight Frye's Renfield. The disc also offers black-and-white production stills, color set photos, a trailer, and a prop PDF of the April 18, 1925 Sydney Bulletin. Amusingly, the article describes the Emma sailors as being attacked by "a queer and evil-looking crew of Kanakas and half-castes" when they encounter the Alert, which, although taken verbatim from Lovecraft's tale, directly contradicts events in the picture's abandoned ship sequence. The file additionally reproduces an assessment of explorer and geologist John Walter Gregory's largely-forgotten eugenics treatise, The Menace of Color, whose anonymous reviewer remarks that "...assimilation is the only alternative to an upheaval which many observers consider immanent; but in the process North America will be turned, like South America, into a half-caste continent, with what effect nobody can foresee." Those words will undoubtedly distress delicate sensibilities, but the two pieces certainly complement one another in light of Lovecraft's apprehensions about Anglo-Saxon endurance in the face of Western degeneration.

Intertitle options are available in an extravagant twenty-six languages, from Catalan and English to Turkish and Welsh. The score of this forty-seven minute feature, which contains five chapter stops, is available in both tinny "Mythoscope" and Hi-Fidelity. The intrepid filmmakers are currently in post-production on a sound adaptation of Lovecraft's 1931 yarn, The Whisperer in Darkness (a trailer is available online), and I eagerly await the Society's latest rendition of this seminal writer's fantastic fiction. In the meantime, Cthulhu fhtagn!