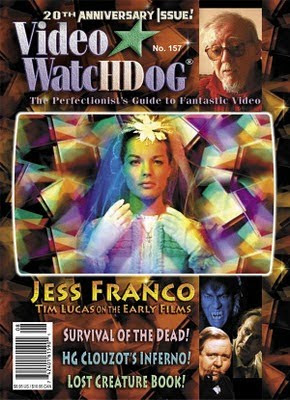 This summer marks the hard-to-believe twentieth anniversary of the inaugural issue of Tim and Donna Lucas' Video Watchdog. "The Perfectionist's Guide to Fantastic Video" began in 1985 as Mr. Lucas' column for Video Times, then migrated to Gorezone, and finally the Cincinnati couple set out on their own in 1990 as publisher-editors. "Why devote a consumer-oriented guide to fantastic video?" Lucas asked in the first installment of his "The Watchdog Barks" column. "The answer is simple. This genre gave birth to motion pictures, yet no other kind of motion picture is so consistently subjected to the slings and arrows of outrageous editorial meddling; horror films in particular. Foreign horror films, even more particularly." In addition to identifying so much monstrous meddling on the Scissors Circuit, Lucas has in the intervening decades answered, many times over, his own call for "the writing devoted to the genre to become more enlightened. Enlightening." He has, quite frankly, set new standards for genre scholarship.


That first issue featured Lucas' survey of the prolific and bizarre oeuvre of Jess Franco, "How to Read a Franco Film," which he had already begun to examine in issues 78-79 of Fangoria and issue 5 of Gorezone. "You can't see one Franco film until you've seen them all," Lucas aphoristically observed, plunging himself and his readers into the wild world of this heretofore neglected Spanish auteur. The issue also included amusing excerpts from journalist Lucas Balbo's interview with Franco, who opined that "we make a film first and, afterwards, it becomes a masterpiece but, in Spain, most directors think they are making a masterpiece. Every shot for them must be perfect and, in the end, this only results in unbearable films and terrible headaches." Lucas prominently raised the profile of Senor Franco, significantly expanding the critical perspective on this Eurocult maverick, who recently won his nation's Goya de Honor Lifetime Achievement Award.

"Franco considers himself a 'marginal' director," Lucas pointed out in that article, "and, I must admit, a great deal of his cumulative allure comes from my own realization that I am a 'marginal' filmgoer." Video Watchdog is in many ways a diary of Lucas' esoteric obsessions, and there's undoubtedly a lot of himself in the nameless protagonist of his superb 1994 debut novel Throat Sprockets, who visits a decaying movie palace--now reduced to screening pornography--during his lunch hour for flashes of artistry that elude him in what passes for mainstream cinema. ("Adult films," the narrator asserts, "...had a peculiar knack for capturing the listlessness I found at the core of real life, better than so-called 'legitimate' films.") The true cultist is always on the fringes, and Lucas' dispatches from these shadowy zones reverberate with intelligence and style.

Lucas encouraged his readers to become watchdogs themselves, and they helpfully obliged by pointing out film retitlings and particularly egregious examples of censorship. Issue 27's newsdesk recounted the persecution of Winnipeg, Manitoba's James Butters--a VW subscriber, no less--who was arrested by that city's Sex Police and "charged with the possession and distribution of 15 titles found to be obscene under Canadian law." (Among the forbidden films were Radley Metzger's sadomasochistic classic The Punishment of Anne [1975; aka The Image] and Jorg Buttgereit's Nekromantik shockers [1987-91].) Mr. Butters was, VW reported, "fined $4,600 in addition to his legal fees." An editorial in the previous issue addressed the outrageous attempt of the Cincinnati prosecutor's office to charge the Pink Pyramid, a local bookshop, with pandering obscenity. The store's crime? Offering a videocassette of Pier Paolo Pasolini's notorious swan song, Salo, or the 120 Days of Sodom (1975), for rental. (The film was "about one thing and one thing only: the sexual torture of teenagers," complained the city's numbskull safety director, completely ignoring Pasolini's scathing critique of Benito Mussolini's murderous republic.) Happily, Hamilton County Municipal Court Judge William Mallory, Jr. threw the case out of court.

Lucas' editorials are my--and probably many readers'--favorite part of the magazine. In issue 9, he recalled attending a revival of Walt Disney's Pinocchio (1940), whose sequence of Lampwick's donkey transformation disturbed a child in the audience. "Instead of quietly assuring her that everything would be all right," Lucas wrote, her father immediately removed the girl and her sister from the theatre, where they went "screaming up the aisle." He astutely observed that "parents, instinctively shielding their children from apparent dangers, sometimes forget that all great children's films have a dark side...and that this darkness serves a moral purpose." In an age of overly protective parenting, adults would do well to remember the author's wisdom.

Lucas has never been afraid to call attention to the singular lack of imagination that far too many filmmakers exhibit, pointedly remarking in issue 20 that "science fiction films should be experimental and adventurous, but they are more often timid and nostalgic....And when the odd, progressive movie does come along, it's typically remade to death, until the original becomes stale by association." In issue 21, Lucas remembered greeting the revelation of Darth Vader's siring of Luke Skywalker in The Empire Strikes Back (1980) with a yawn: "the idea of crossing swords with an adversary who turns out to be your father dates back to Sophocles," which eventually led him to "accept that very little about the cinema is ever genuinely new, and that our society's myths must change their clothes from time to time, in order to bridge the centuries and hold our attention."

One amusing column that stands out in my mind is issue 33's editorial addressing a kerfuffle with actress/producer Barbara Steele, who, in an "open letter" in the January/February 1996 number of Films in Review, expressed her "fury" at the Lucases for allegedly "mass-mailing" a 1995 Christmas card sporting her on its cover with the couple. (In FIR's accompanying picture, Ms. Steele looks as mad as a wet hen and, verily, ready to hurl maledictions.) The Lucases had published a calendar for that year devoted to Steele's legendary Mario Bava thriller, Black Sunday (1960), the cover of which bore the actress' autograph, and the seasonal card in question was taken from a Polaroid of Steele with the Lucases at an October 1994 Chiller Theatre convention, and was mailed only to several of the couple's friends. By venting her spleen in Films in Review, the actress inadvertently publicized the card, prompting some of Video Watchdog's readers to contact the Lucases for copies (which, naturally, weren't available). I felt the Lucases' pain, because I revere Ms. Steele, and would certainly hate to have her angry at me.

Other memorable "Watchdog Barks" pieces include the magazine's first post-9/11 column in issue 77, in which Lucas considered the "bitter irony" that that dreadful day's atrocities--and, let us not forget, its astonishing heroism--"had their only parallel in the annals of our popular entertainment. Events such as these were so inconceivable to us that they belonged exclusively to the realm of fantasy...but no more." An amusing-in-hindsight column in issue 38, several years earlier, offered Lucas' less-than-enthusiastic first response to the DVD revolution that would overwhelm laserdisc and videocassette: "...everything that we've heard and read about DVD has fallen far short of the expectations excited in the public by the hucksters [italics mine] of the 5" format." But my all-time favorite piece is Lucas' tribute in issue 153 to his late mother, who suffered from schizophrenia. It's a heartbreakingly beautiful column, and I greatly admire Mr. Lucas' courage in writing it.

The magazine has come a long way since that first issue, which was indifferently cut by its original printer, whose "paper stock [was] just a step up from shirt cardboard." (The Lucases switched to Crest Graphics for the second, and all other, issues.) Douglas E. Winter's always-essential "Audio Watchdog" column commenced in number 22, VW switched from a bimonthly to monthly format in 2000, and made the leap from black-and-white to full color for its 100th number. (Mrs. Lucas' art direction, of course, makes each edition a joy to behold.) In issue 155, Lucas, who is also devoting much of his time to a screenwriting career, disclosed that "my passion for horror and fantasy cinema has diminished over the past couple of years," and the magazine has returned to its bimonthly format, allowing him to catch his breath and, as he put it in the following issue's column, "follow my Muse into new avenues of thought."

Number 157 features Lucas' epic revisitation of Franco's early work ("In many ways, Franco's sprawling filmography exists outside the realm of film proper. It is film improper"), as well as David J. Schow's fascinating "review and case study" of Danny DeAngelo's now-withdrawn Features from the Black Lagoon, a work of, apparently, breathtaking plagiarism. (Author Schow was one of several sources pilfered by DeAngelo; why publisher McFarland and Company didn't scrutinize this book is incomprehensible.) Lucas and his merry band of contributors (Charlie Largent, Kim Newman, Rebecca and Sam Umland, et al) have made this digest a distinct pleasure for many years now, and I confess that his, and their, work has had a substantial impact on my own meager scribblings. Special thanks to my friend Nathaniel Thompson--another terrific VW contributor--at Mondo Digital for introducing me to this wonderful magazine so long ago. Here's to the new avenues of thought in the next twenty years!
Posted by James Pagan at 12:41 PM