THE DARK GODS OF THE TENDERLOIN: SLEAZOID EXPRESS 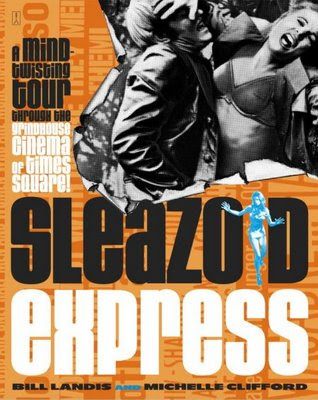 Some filmmakers have their fingers on the pulse of the movie-going public, others down its throat. The latter group constitutes the rogues' gallery of Bill Landis and Michelle Clifford's Sleazoid Express: A Mind-Twisting Tour Through the Grindhouse Cinema of Times Square! (Fireside/Simon & Schuster, 2002; 315 pages). Landis, who earlier published a splendid biography of Luciferian auteur Kenneth Anger, and wife Clifford vividly recreate the lost world of Manhattan's 42nd Street, the former cesspool which now serves the Big Apple's international tourist, as opposed to its rough, trade. Landis (1959-2008) pulled several years as a projectionist/manager at sundry fleapits, braving a workplace where "muggings and bloody needles were the order of the day." His legendary fanzine helped legitimize the grindhouse genre, earning him the enmity of underground heavyweights Jonas Mekas and Ken Jacobs, while endearing him to Mr. Anger. (Anger later feuded with Landis over his unauthorized bio, but that's showbiz.)

The tour ranges from the stylized kink of the Olga trilogy (1964-66) and other early roughies to women-in-prison epics and mondo movies. Their creators are creatures of the night: shadowy, often pseudonymous people who move with hand-held Bolexes through the margins, where magic usually happens. Film distributor Stan Borden "was slobbering, but he was personable." Producer George Weiss "had a Jungian feel for the sordid American S&M unconscious." Andy Milligan made movies for as little as $750, and the costumes for his gory period pieces were loudly colored so as to survive the blowup to thirty-five-millimeter. Once, when his Sweeney Todd ripoff Bloodthirsty Butchers (1970) was resurrected at the Lyric, a censored throatslitting--performed to appease the MPAA--resulted in the hurling from the balcony of a small refrigerator. "The crowd became agitated," Landis notes dryly. These were dangerous places to displease an audience.

The Cameo purveyed industrial-strength hardcore, while the Anco "sat on a nest of rotten eggs." Genderbenders from Ed Wood to Doris Wishman unreeled while "Latino junkies on the lam after a quick strongarm robbery slumped in the aisles." The Rialto programmed an unrelenting gore apocalypse; the Roxy's blaxploitationers "were as inflexible and distinct as the troublemakers sitting in the audience." These theatres form an infernal roll call as the authors invoke the Dark Gods of the Tenderloin.

Of course, conjuration demands sacrifice, preferably bloody. Roughie pioneer Michael Findley was decapitated in a helicopter crash atop the Pan Am building. Laurence Merrick, director of 1972's Oscar-nominated Manson documentary, was murdered several years after the film's release, as was interviewee Ronni Howard. The toll was also psychic. William Sanderson, best known today as hillbilly Larry from Newhart, hanged a black pastor's wife in Fight for Your Life (1977), a picture "calculated to drive inner city audiences berserk with rage." He told Clifford he was afraid the film would come back to haunt him. (Landis, who was present at an Empire screening, reports that "white patrons tried to leave the theatre as unassumingly as possible"). Many filmmakers never made any money from their work. Distributors sold prints to subdistributors, who could reissue them with impunity while their creators received no residuals whatsoever. Roger Watkins was unaware for years that his pseudo-snuff Last House on Dead End Street (1977) was actually playing somewhere and even turning a profit, as well as stomachs. The Dark Gods have a voracious appetite.

This is not to suggest the book is without faults. The authors perpetuate the myths that Milligan directed 1964's The Naked Witch (it was Buchanan), and that celebrity monologist Spalding Gray appeared as the depraved El Sharif in Ilsa, Harem Keeper of the Oil Sheiks (1976). They also claim that Ruggero Deodato's Cannibal Holocaust (1980) was the director's response to Umberto Lenzi's Cannibal Ferox/Make Them Die Slowly (1981), when it's the other way around (though Lenzi did inaugurate this notorious subgenre). Ivan Rassimov, and not Massimo Foschi, is listed as the star of Deodato's The Last Survivor/The Last Cannibal World (1977), and so forth. These are curious errors for film cultists to make, and Sleazoid Express would have benefited from tighter editing.

To take this tour, however, is to experience by proxy the movies' anti-canon, a refreshing alternative to that puffed-up mainstream that imagines As Good As it Gets (1997) is as good as it gets. The socially disreputable sorcerers of cinema remain as vital as ever in this age of Hollywood product whose innovations are inversely proportional to their stratospheric budgets. Really, now: Wouldn't you rather watch I Drink Your Blood (1970) or White Slaves of Chinatown (1964) than the latest groaner from Jerry Bruckheimer? (Video companies are helpfully appendiced.) See them and die a thousand deaths.
Posted by James Pagan at 11:16 AM

PART OF THEIR WORLD: PHASE IV 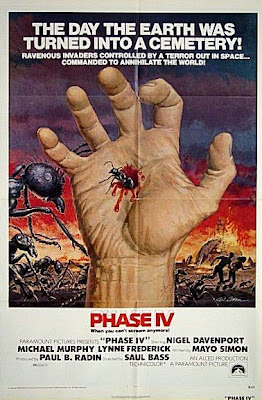 Ecological revenge constitutes one of the most lurid and magnificent of film subgenres, visiting vicarious vengeance on mankind for its desecration of Terra Mater. Whether the agent of retribution is a reawakened dinosaur or an army of tarantulas, humanity must pay in full for its transgressions against the planet. From land development to runaway pollution and nuclear testing, the eternal penalty is blood, straight from the tap.

Consider the avenging ant. The power of this mighty soldier has been well-represented cinematically by the Marabunta invasion of Byron Haskin's The Naked Jungle (1953) and--more memorably--by the atomic mutations of Gordon Douglas' Them! (1954). Saul Bass examined the world of these (anti-) social insects in 1974 with Phase IV, which Paramount, in association with Legend Films, has recently released as a no-frills DVD. The picture, which took the Grand Prix at the following year's International Festival of Science Fiction Films in Trieste, was a commercial failure in its time, but a cult has steadily grown around it in the intervening years, and Phase IV is ripe for rediscovery.

Bass, best known for his incredible title sequences for Otto Preminger's The Man With the Golden Arm (1955) and Alfred Hitchcock's Psycho (1960), later directed the Academy-Award-winning short Why Man Creates (1968), but Phase IV remains his only feature. It is an experimental work, absorbing the surreal vision of 1972's Oscar-netting pseudo-documentary, The Hellstrom Chronicle (along with its microcameraman, Ken Middleham), while adding a dash of (then-) New Wave style. An intentionally vague interstellar event has somehow advanced the intelligence of various ant species, who put aside their traditional antagonisms to evolve strategies against human beings in the American Southwest. Biologist Ernest Hubbs (Nigel Davenport) and information specialist James Lesko (Michael Murphy) investigate the disappearance of the insects' primary predators, as well as the mysterious erection of several eerie anthill towers (recalling the 2001 monolith), from their hive-like experimental station in the Arizona desert. Several families have already been forced out of the area by the insects, and the creatures stage an assault on the remaining Eldridge family's farm, ingeniously floating--like soldiers on a raft--on a piece of bark across the fuel ditch the family has dug as a defense, and devouring the very structure of the family's house until it collapses. The ants also attack the station, forming a chain of insects to short-circuit the truck powering the biosphere's generator.

The Eldridges' car is totaled in the chaos after ants invade the vehicle, and the farmer, his wife, and their farmhand are poisoned by the defensive insecticide shower the scientists rain upon the creatures. Only their granddaughter Kendra (Lynne Frederick) survives, rescued by Hubbs and Lesko as they emerge in their protective suits and insect-eyed goggles to inspect the carnage. The girl goes ballistic when she spots Hubbs' test ants in their glass maze, shattering the glass and causing Hubbs to be badly bitten. As his arm swells and his health--physical and mental--deteriorates, the creatures prepare for the next move in their human-insect competition, a game the smug, technocratic Hubbs savors. "We challenge with yellow chemistry," he says admiringly of the insecticide-adapted army, "and they respond with yellow creatures."

Davenport's performance of the lead scientist is pitch-perfect in its detached ruthlessness, recalling his military survivalist in Cornell Wilde's No Blade of Grass (1970). Murphy offers an effective emotional counterpoint, the warm American to Davenport's cold Anglo, and Frederick is appropriately understated as the withdrawn Kendra. Mayo Simon, who scripted everything from Judy Garland's final film, I Could Go On Singing (1963), to the underrated Futureworld (1976), here turns in his best work, exercising considerable restraint and sustaining an increasingly dark mood of meditative ambiguity. Too few science fiction films since the Seventies have explored ideas, but Phase IV is actually about something: it's ecology at its artistic deepest, outlining a grave new world in which mankind is but a minor inconvenience--mere human insects, as it were--in the Great Chain of Things. The film offers an ironic spin on the eternal battle of the sexes, as Hubbs realizes that, in order for the ants to be defeated, their queen must be destroyed. "It is she who speaks," the delirious man intones, but he is too far gone in his faith in scientific know-how to realize that she must be obeyed. An ant matriarchy is rising as the human patriarchy collapses like all great civilizations. "We knew then we were being changed and made part of their world," Lesko observes in voiceover as he and Kendra somberly await their new roles at film's end. "We didn't know for what purpose, but we knew we would be told."

Dick Bush's photography coats the screen in eerily vivid Technicolor (especially striking are the saturated blues of the biosphere at night), while Middleham's microcameras capture the insects patrolling their earth tunnels like cave warriors in some sword-and-sandal epic. One astonishing sequence--a pan of rows of dead yellow ants that the surviving blacks have arranged--is unexpectedly moving in its formalization of ritual and respect. Perhaps the film's most celebrated image--and the one referenced in the picture's deceptively tawdry poster--is the shot of ants emerging from three holes in a corpse's hand, a powerful hommage to a similar moment in Luis Bunuel and Salvador Dali's Un Chien Andalou (1929). In hindsight, it's a shame there's no title sequence for Bass to work his wonders on, but the absence of one is certainly in keeping with Phase IV's understated atmosphere. According to Jay Cocks' Time review (October 14, 1974), Bass deleted the film's original ending--"a montage of hallucinatory images suggesting man's destiny after the ants have had their way"--because it was "too abstract." A fair amount of computerized psychedelia is present at the climax, however, and the picture's closing shot of the rising sun is effectively elegiac. Brian Gascoigne's score (realized in conjunction with David Vorhaus and supplemented by Stomu Yamashta's montage music) is anxiously ambient, occasionally employing fretless bass to acrobatic effect.

The 84-minute film is presented in 1.78:1 anamorphic widescreen, an approximation of its 1.85:1 theatrical ratio. Bass died in 1996, but the main actors are still with us, so it's regrettable that no audio commentary is provided. For that matter, there's no trailer, either, even though one is available on Volume Three of Synapse's 42nd Street Forever: Exploitation Explosion compilation; Paramount and Legend's omission is frankly inexplicable. The transfer reveals occasional grain (especially evident in the amazing montage of Lesko--resembling an extra from George Romero's The Crazies [1973]--scattering insecticide on his anguished trek to the queen ant's chamber), but is scarcely a distraction. Paramount's DVD, which contains a dozen chapter stops, is a definite improvement over the label's earlier videotape version, but the absence of supplemental material is a major disappointment. Perhaps, one day, a label like Criterion will treat Phase IV to the definitive edition that this film deserves.  Here's the trailer.