THE AWE WE TOOK FOR GRANTED: TRASHFIEND 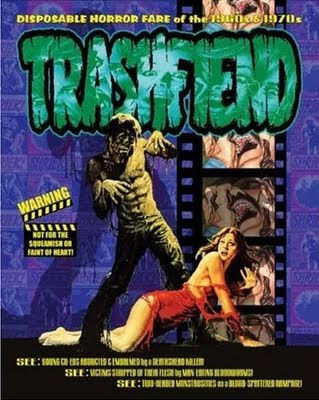 "As adults," Scott Stine observes in the introduction to his 2009 collection Trashfiend: Disposable Horror Fare of the 1960s & 1970s, Volume One (Headpress, 321 pages), "we rarely experience the awe we took for granted as children. As we grow older, we gradually become more desperate to relive such moments, and we find that only through the very things that sparked our collective imaginations as children can we even come close to this now-elusive wonderment." The vehicles for such an endeavor constitute a figurative form of time travel--or, if you prefer, sympathetic magic, for the objects that obsess us possess all the weight of relics. Stine's obsessions range from films to toys and comics, but they all center on that perennial fascination of the small set, monsters. Children, natural magicians that they are, have a powerful sense of Otherness, as manifested in their love for the numerous creatures who patrol the nights of their wondrous worlds. Stine's compendium, an outgrowth of an earlier fanzine, allows us to explore his own enchanted evenings.

The book's opening section, "It's Only a Movie...," analyzes an array of horror and science fiction oddities, from Peter Newbrook's amazing The Asphyx (1972)--inspired, Stine informs us, by the Nineteenth Century French scientist Hippolyte Baraduc's alleged ectoplasmic photo of his late wife taken twenty minutes after her death--to Del Tenney's voodoo mishmash, Zombies (1964), which distributor Jerry Gross notoriously, and misleadingly, retitled I Eat Your Skin for the picture's 1970 revival as the companion feature to David E. Durston's memorable rabies rampager, I Drink Your Blood. The reader is treated to trivia on such arcane delights as Kinji Fukasaku's mind-bending The Green Slime (1968) (this surreal space opera's Zappaesque theme, which has haunted my head for several decades, was belted out by Bel-Airs and Challengers drummer Richard Delvy, who died February 6 of this year), Emilio Paolo Miraglia's The Night Evelyn Came Out of the Grave (1971) (Stine does not, however, mention the gimmicky "bloodcorn" sold at concession stands by the giallo's American distributor), and Jeff Lieberman's ecological revenge shocker, Squirm (1976), undoubtedly the greatest worms-on-the-warpath epic of them all. "I desperately wanted to see the film," the author recalls of this last thriller, "but my parents--besides having no interest in sitting through it themselves--thought it would only contribute to my morbid inclinations." It certainly contributed to mine.

Unfortunately, Stine erroneously credits--as do several other sources--Mario Bava with the co-direction of Anton Guilio Majano's facial restoration farrago, Seddok, the Heir of Satan (1960; U.S. release, Atom Age Vampire), but, whoever producer "Mario Fava" actually was, he surely wasn't the great Bava. For that matter, Bryan Edgar Wallace, son of the more famous English mystery novelist, had nothing to do with the screenplays for Dario Argento's so-called "Animal Trilogy" (The Bird With the Crystal Plumage [1970], The Cat o' Nine Tails [1971], and Four Flies on Grey Velvet [1972]); indeed, he is not even mentioned in Maitland McDonagh's definitive Argento study, Broken Mirrors/Broken Minds.

"The Darker Side of Soul Cinema" scrutinizes the brief seventies run of blaxploitation horror. William Crain's Blacula (1972) is, of course, the most prominent representative of this field, and watching the film on television was obviously epiphanic for the preadolescent Stine: "Forget that It's a Small World After All crap. If black people, too, could be monsters--especially one as groovy as Blacula--then they were alright [sic] by me." The two Prince Mamuwalde movies many trashfiends will remember, but who among them has seen William Girdler's 1974 Exorcist rip-off, Abby? Stine has, by gum, but I regret to report that he pronounces the picture "one of those efforts that is more impressive as a lost film than, well, a found one." (Warner Brothers sued American International for copyright infringement, and Abby was immediately withdrawn, though it occasionally materializes as cruddy bootlegs.) The most amusing entry is on Jamaa Fanaka's Welcome Home, Brother Charles (1975), in which a wrongfully-convicted drug dealer seeks soul vengeance by strangling his white oppressors with his monstrously-mutated member (which also has the power to hypnotize the fair sex). They definitely don't make them like that any more.

Trashfiend also contains interviews with such genre players as Cal Bolder (Jesse James Meets Frankenstein's Daughter [1965]), Richard Cardella (The Crater Lake Monster [1977]), and writer-director John Stanley (Nightmare in Blood [1976]). Boulder (nee Earl Craver), was an LAPD motorcyclist who entered show business after fortuitously ticketing the man who became his agent. He appeared as a heavy in various theatrical and television oaters, but is best remembered for his turn as the reanimated boy toy in William Beaudine's sagebrush shocker. Bolder later became a novelist; when asked what, of his acting days, was his "greatest regret," he reveals that he turned down an offer from another, prospective agent "to go to Italy and shoot a string of western movies" because "I was doing fairly well with the agent I had." As fate would have it, those same spaghetti shoot-'em-ups turned Rawhide's Clint Eastwood into an international icon.


Cardella, who spent a quarter of a century with the Encinitas Fire Department, collaborated with director William Stromberg on several short films; the two stop-motion enthusiasts then crossed over into features with Crater Lake, but the "machinations" of distributor Crown International--who insisted the dinosaur spectacle was losing money at the box office, when, in truth, it was not--wore the men down. Stromberg never made another feature, and Cardella "just went on being a fireman and looked at it as something to bring up at parties: 'Did you know I was once an actor?'" He retired as Fire Captain in 1986, and has since appeared as background ("the politically correct way to say extra") in such pictures as Wolfgang Petersen's Outbreak (1995) and Frank Darabont's The Majestic (2001).

Stanley rose from copy boy to writer and editor at the San Francisco Chronicle; he also published several novels and hosted Sacramento's Creature Features on KXTL-TV from 1979 to 1984. This series blossomed into Stanley's Creature Features Movie Guide, which went through six editions. He also found time to edit the 1989 biography Them Ornery Mitchum Boys, which was, from the sound of it, a difficult experience because "John Mitchum just wouldn't tell the full truth about his brother Bob and, as a result, I think readers know the book is a sham." Stanley is also less than enthusiastic about his vampire-terrorizing-a-convention metahorror, Nightmare in Blood, which "[took] up too many years of my life" and "suffers too much from weak production and story."

Stine profiles comic book creator and filmmaker Pat Boyette, whose pseudonymous, bargain-basement Dungeon of Harrow (1962) must be seen to be believed. Boyette also wrote and penciled strips for Charlton and Warren Publishing, and Trashfiend contains nearly as much information on comics (including a lengthy appendix) as on psychotronic cinema. Stine interviews writer/illustrator Bruce Jones, who declares of his fellow artists, "Comics were looked upon with general disdain by the public at large, but we didn't give a damn. We were out to change the world. The brevity of youth, you know?" Marvel's various black-and-white horror magazines, from Dracula Lives! to Monsters of the Movies, are exhumed as well, and the author additionally examines such sixties' horror digests as Fear! and Shock, publications which valiantly attempted to revive the pulp traditions of Weird Tales but languished at newstands. (The covers of these periodicals, incidentally, are enormously entertaining, with lurid paintings aplenty and such sensational story titles as "Lash of the Avenger" and "Satan's Mistress.") Marvel even attempted to enter the literary field with The Haunt of Horror, which lasted a mere two issues before being recycled as another of the publisher's black-and-whites; these more adult comics briefly featured the largely-forgotten Gabriel the Devil Hunter, an ex-priest who "[spent] each issue going through the motions, having turned exorcism into a rather dull, predictable science." Strip writer Doug Moench, obviously hoping to exploit the alleged deviltry which surrounded the creation of The Exorcist (both novel and film), editorialized that "he was plagued by a series of obviously supernatural occurrences" while scripting Gabriel, and Stine wryly remarks that Moench's "tongue in cheek assertions are a much better read than many of the stories themselves."

Other Stine obsessions include Arthur Rankin's and Jules Bass' animated Mad Monster Party (1967), Topps' infamous Mars Attacks! trading cards (replete with Wally Wood's rare, grisly wash and pencil studies), "monsterabilia" (Creepy Creatures jigsaw puzzles and Schaper Manufacturing's Voodoo Doll Game), and the now-obsolete realm of eight-millimeter horror. I confess I feel rather like a child myself admiring Stine's reproductions of Ken and Castle Films box art. These two- to five-hundred-foot highlights from classic and not-so-classic pictures were heady stuff in the pre-home video era. My father bought copies of House of Frankenstein (1944), The Beast With Five Fingers (1946), Varan the Unbelievable (1958), and Dinosaurus! (1960), and would, when I badgered him enough, fire up the family projector so we could watch soundless ten-minute selections from these features in our living room. The most sought-after of these boxes are, not surprisingly, the rarest titles "with the most lurid covers," and Stine admits to "fighting tooth and nail" for them on eBay. He discusses storage and preservation methods, and oddly misidentifies the reproduction of Frankenstein Conquers the World as L'Amante del Vampire (1960; U.S. release, The Vampire and the Ballerina), while the caption for Yongary, Monster from the Deep (1967) claims the film is Frankenstein Conquers the World (1965)!


The most moving section of Trashfiend chronicles Stine's heroic quest for information on KIRO-TV's Nightmare Theatre, which aired Fridays from 1964 to 1978 on CBS affiliate Channel 7 in Everett, Washington. Stations across the country once employed horror movie hosts, some of whom (such as Vampira, Zacherley, and the aforementioned Stanley) attracted national notice. KIRO's entry was helmed by Joe Towey, in full vampire regalia, as the Count. Precious little footage of Nightmare Theatre survives, however, as the two-inch videotape reels used to shoot the show were extremely expensive. The series was canceled by station president Lloyd Cooney because--according to floor director Dave Drui--it embarrassed the affiliate: "Here we were in the seventies, with KIRO trying to be on the cutting edge with all their fancy news gimmicks...but they still had shows on the air that were throwbacks to the fifties." Although the series was quite successful, "management couldn't wait to pull the plug."


Stine's quest was complicated by his search for a new residence, financial worries, and the catastrophic crash of his computer--Trashfiend, in fact, had to be reconstructed from the author's notes and cache file fragments. This disaster befell him mere weeks before the manuscript was due at Headpress, and Stine's "desire to retreat into a childhood that spoke of simpler times increased." Although e-mails from Towey's son and KIRO stage manager Derik Loso arrived too late to meet the author's deadline, he asks his readers to "stay tuned" for further developments. (Loso, I'm sorry to say, leapt to his death from the Aurora Bridge in November 2008.) Stine was able to interview Drui, as well as cameraman Chuck Lindenberg, in regard to the show, and his webpage tribute (complete with program schedule, articles, and fan letters) is accessible in the interim at www.nightmaretheatrenw.net. It's a genuine labor of love, and Count Towey could not ask for a better Renfield.

Although he can recreate the series' weekly presentations with video double features, and sit like a boy again in front of his television screen at the magical hour, Stine laments that he can "never recreate the moment when these films first revealed themselves to me." But, culturally speaking, he has accomplished much more than that, pluckily rescuing a fanged horror host from the fog of history. If there is treasure in trash, then Stine, I submit, has found it. Over the course of this collection, the vision of the child, his eyes wide in wonder, shines through. Unlike far too many adults, the author never takes his awe for granted. I enjoyed Stine's book immensely, and I very much look forward to Volume Two.
Posted by James Pagan at 1:30 PM