FORMALDEHYDE BLUES: GARDEN OF THE DEAD 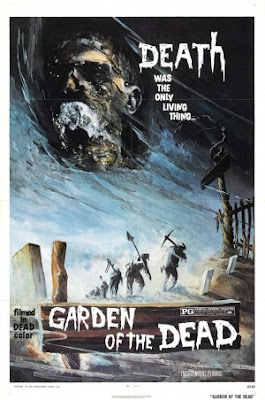 Zombie completists with an hour to kill, or at least batter, will want to examine John Hayes' agreeably awful Garden of the Dead (1972), which secured a general release two years after the fact when it served as supporting feature to the director's far superior Grave of the Vampire (1974). That fanged fantasia boasted strong performances by Michael Pataki and William Smith; unfortunately, performers of such cultish caliber are conspicuously absent in Hayes' earlier thriller. Garden was occasionally unloaded on unsuspecting audiences over the next several years; in fact, I first heard of the film in the early Eighties, when Sneak Previews' Gene Siskel and Roger Ebert selected the picture as one of their "Dogs of the Week" (a badge of honor if there ever was one), and I remember being mildly disappointed that the movie did not make it to my neck of the woods way back when. Thankfully, Retromedia's now-out-of-print 2002 "Drive-In Theater" DVD briefly revived this shoestring shocker, which clocks in at a tolerable fifty-eight minutes.

Garden, one of countless ersatz Night of the Living Dead (1968) entries, is set at a flimsy-looking prison camp (lensed in Topanga Canyon and consisting of little more than barbed wire) ruled by a ruthless warden (Philip Kenneally, resembling a mafia mortician). For some damnfool reason, the inmates are manufacturing formaldehyde, which the incarcerated morons constantly sniff for cheap highs. The way they huddle around each other, ecstatically inhaling fumes from a hose, one half-expects the gathering to degenerate into an orgy. The camp, whose guards are oblivious to all this hysterical huffing, is scheduled for closure in three months (a letter from the Department of Corrections informs the no-nonsense warden that he "is not oriented enough in their new system"); meanwhile, several inmates decide to check out ahead of time by escaping, but are gunned down by pursuing officers. The formaldehyde fiends are buried in unmarked, shallow graves by other prisoners, but--reanimated by the chemical compound--return to the prison with garden hoe and weed whacker for revenge.

Quite honestly, it's difficult to dislike such a preposterous picture. While the red stuff is in regrettably short supply (no flesh-eating here, I fear), the undead inmates look appropriately creepy in their ghoulish raccoon eyes and grotesque green facepaint. The film lacks the nihilistic intensity of George Romero's work, but its use of an industrial agent to revive the dead anticipates the ultra-sonic-sound-reawakened zombies of Jorge Grau's superb Let Sleeping Corpses Lie (1974; aka Don't Open the Window, Breakfast at the Manchester Morgue, and innumerable other retitlings). Hayes stages his action sequences for the most part indifferently, though the scene of one of the (living) inmates' waitress girlfriend (Susan Charney) shrieking as the undead prisoners surround her motorhome after butchering her neighbors is certainly memorable, and would have given my prepubescent self bad dreams for a week--nay, a fortnight. The zombies moan and groan, occasionally leaping through the air and swinging axes as if they were Indian braves on the warpath, but are easily terminated by shotgun blasts and even the prison searchlight, which causes them to drool rabidly and their flesh to decompose rapidly. Jack Matcha's anti-drug script is heavy-handed, but reflects the mind-blown, instant gratification madness of the times; even in their living death, the creatures cannot get enough formaldehyde, wallowing in the stuff and actually transporting a barrel of it to the climactic showdown. I especially enjoyed the totally unsuitable jazz soundtrack, which consists of library cues that would be more appropriate for a Mike Hammer yarn.

Retromedia is notorious for its cheap prints, and once again the label delivers the bads. The minimally letterboxed, non-anamorphic transfer of this 1.85:1 trasher appears to have been culled from an old videocassette, though I can't imagine that Garden ever looked even halfway decent; indeed, the picture's poster boasts, or at any rate confesses, that it was "filmed in dead color" (by one H.A. Milton). Titles and credits unreel over freeze-frames, and the camera constantly cuts away from the carnage, presumably to secure the picture's PG rating. (Does a longer version exist in some cinematic cemetery? The film was also released as Tomb of the Undead.) Garden is introduced by Akron's WAOH horror host Son of Ghoul (Kevin Scarpino), who advises the viewer that he may want to smash his television set after watching the feature; to this end, he induces filmmaker/professional wrestler/Retromedia mogul Fred Olen Ray to toss a bowling ball into a tv screen. The back of the keepcase--which, although promising "sex-crazed zombies," offers "no naked girls"--claims to include Garden's original trailer, which on closer inspection turns out to be a most-welcome coming attractions reel for Grave. Retromedia's disc contains six chapter stops, as well as a link to the label's website, which sports a provocatively-posed still of cheesecake model Miss Kim.
Posted by James Pagan at 9:29 AM