EXPERIMENT IN TEDIUM: A PLACE FOR LOVERS 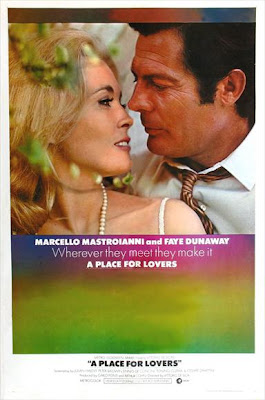 Vittorio De Sica's A Place for Lovers ("Amanti," 1968) is perhaps best remembered today, if at all, for its inclusion in Harry Medved and Randy Lowell's snarkily amusing 1978 guide to The Fifty Worst Films of All Time (and How They Got That Way). Roger Ebert proclaimed the picture "the most godawful piece of pseudo-romantic slop" he ever had the misfortune to experience. Must-see viewing, in other words, for the masochistic Mr. Pagan. Once, at any rate. The picture has, understandably, never secured a home video release; however, Turner Classic Movies recently broadcast De Sica's messterpiece, and I'm pleased to report that, if A Place for Lovers is perhaps not precisely one of the Fifty Worst Films--offhand, I can think of other, more deserving celluloid atrocities, especially anything released by the execrable John Hughes--it's definitely the director's worst.


Julia accosts the engineer the next day at an autodrome where he's testing crash safety water bags; they reconcile, travel to the Alps, and make-a de love. Unfortunately, Julia's frantic friend Maggie (Caroline Mortimer) spoils everything by telephoning the couple's chalet and informing Valerion of the designer's failing health, insisting that she should be rehospitalized. The mortified Julia motors off to commit suicide, but Valerion catches up with her in the film's climax, trusting her not to kill them both by driving their Jeep off a mountain in a truly ridiculous sequence. They do not perish, to this viewer's considerable displeasure.


As my Italian language professor undoubtedly exclaimed from time to time when grading my pitiful papers, "Dio mio!" One would never suspect, watching A Place for Lovers, that De Sica was formerly a master of anything, much less neorealism--indeed, John Simon memorably compared the late director, who after all gave the world such classics as Bicycle Thieves (1948) and Umberto D. (1951), to "a once-famous operatic tenor turned pop singer and grown old, trying to sing one of the arias from his youthful repertoire, and left wrecked and wheezing on the high C's." It's also difficult to believe that five--five, I say--scenarists toiled fruitlessly on the screenplay, including Brunello Rondi, who co-wrote with Renaldo Cabieri the play upon which the picture is based. (Ebert suggests the writers were "possibly locked into separate rooms and forbidden to communicate," which I can easily believe.) The theme of a dying woman plunging headlong into hedonism has dramatic potential, if not exactly originality, but there's utterly no sense of depth or any appreciable tension here. The dialogue includes such daffy lines as "I see you like experiments. How would you like to experiment by staying with me for two days?" The entire film is an experiment, in tedium.


Dunaway's bloodless performance obliterates the memory of her accomplished turn in Arthur Penn's Bonnie and Clyde (1967). (Fans of the actress may be interested to know that she appears in another of Medved and Lowell's Fifty Worst, Otto Preminger's hilarious Hurry Sundown [also '67]). Mastroianni, for his part, is pure, unadulterated ham; in the film's funniest moment, he ecstatically tells Dunaway "I love you, I love you, I love you!" as if he's about to spontaneously combust. The performers were a genuine item for a brief while; alas, any electricity these two thespians generated in their private lives is conspicuously absent onscreen. Pasquale De Santis, who later lensed Luchino Visconti's The Damned (1969) and Death in Venice (1971), contributes his usual fine cinematography, which remains, together with De Sica's son Manuel's opulent orchestrations, the film's most redeeming quality. Particularly striking is De Santis' composition of Dunaway contemplating a leap to her death as the camera swivels ninety degrees to capture the austere beauty of the high altitude. It's a splendid shot, rendering the foreground player completely irrelevant. A Place for Lovers is an empty shell of a film, but at least it's a beautifully polished one.