Kenneth Anger's Inaguration Of The Pleasure Dome (1954) The '78 Eldorado Version from Mondo Justin on Vimeo.
Kenneth Anger's 1978 reconstruction of his 1954 masterpiece Inauguration of the Pleasure Dome is so rare it had to be sent back to the kitchen. The director's revised "Sacred Mushroom Edition" of the picture substitutes the Electric Light Orchestra's 1974 concept album Eldorado for the film's better-known soundtrack, a recording of Leos Janacek's marvelous Glagolitic Mass. The ELO score, whose over-the-top electropop offers an amusing alternative take on Anger's fantasia, was originally screened at the 1978 Boston Film Festival before vanishing into the Mists of Time. Hats off to Mondo Justin for resurrecting this obscure version, which certainly whets the appetite for his upcoming Projection Booth podcast on Anger's Magick Lantern Cycle.
Posted by James Pagan at 10:32 AM

HERETICS ON MARS: CONQUEST OF SPACE 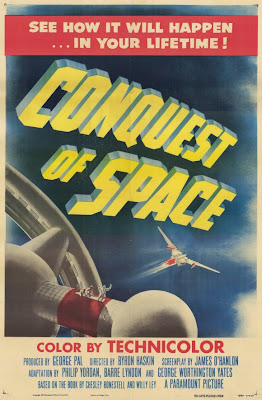 George Pal's rocket ride as a producer of science fiction epics encountered severe commercial turbulence with 1955's Conquest of Space. The picture, inspired by the bestselling non-fiction book of the same title by writer Willy Ley and artist Chesley Bonestell (which Arthur C. Clarke once suggested "perhaps did more than any other to inspire a generation of would-be space cadets"), arrested the momentum that Pal had achieved with his 1950 hit Destination Moon and his subsequent special effects extravaganzas When Worlds Collide (1951), The War of the Worlds (1953), and the ecological revenge epic The Naked Jungle (1954). Conquest's box office failure foiled his plans to adapt Philip Wylie and Edwin Balmer's sequel After Worlds Collide, ensuring that the producer would not return to the science fiction genre--triumphantly, as it transpired--for five years with another H.G. Wells adaptation, The Time Machine.


There's no "plot" as such to Ley and Bonestell's book, so screenwriters Phillip Yordan, Barre Lyndon, and George Worthing Yates eventually fashioned, through numerous rewrites, a fairly realistic storyline which borrows heavily from Wernher von Braun's The Mars Project and manages to incorporate both a deadly oedipal conflict and crowd-pleasing, scantily-clad dancing girls borrowed from, of all things, a Bob Hope movie. In what was, at the time of the film's release, the Near Future, a circular space station not terribly dissimilar from the one in Stanley Kubrick's 2001: A Space Odyssey (1968) orbits Earth while, nearby, a rocket is being constructed for lunar exploration. The station's Captain, Samuel T. Merritt (Walter Brooke), must contend with the hazards of his men falling victim to space fatigue, as well as with his homesick son Barney (Eric Fleming), who was married a mere three months before heading for the stars and has put in for a transfer home (which his father categorically denies). After the astronauts' dinner is interrupted by a meteor shower, tossing everyone all over the place, dapper Dr. George Fenton (William Hopper) arrives with orders from the U.S. President that the rocket's new destination is Mars; he also promotes Merritt to a General.

It seems exceedingly odd not to visit the Moon first, but of course producer Pal had already accomplished that feat in 1950. The normally gung-ho General is distressed by this change of plans, even though his dejected son is actually ecstatic at the prospect. Merritt reluctantly agrees to proceed with the mission, selecting four men to accompany him after first informing the candidates "that no one but an idiot would volunteer": Captain Barney and Sergeants Imoto (botanist Benson Fong), atrocious comic relief and alleged electronics whiz Jackie Siegle (Dick Wesson surrogate Phil Foster), whom the General tells point-blank, "I don't think there's a man on the Wheel with less formal education than you possess," and medicine man Andre Fodor (a German-accented Ross Martin in his film debut). Merritt doesn't wish to take his too-adoring friend Sergeant Mahoney (Mickey Shaughnessy) with them because he's "twenty years too old" (although the Sarge is merely three months younger than the General), but the big lug smuggles himself aboard the rocket anyway, and the men are off on their interplanetary voyage.

It's at this point that the picture takes an unexpectedly religious turn, as the General unpacks his King James Bible and ponders the wisdom of the expedition. After Fodor's airline is accidentally severed during a spacewalk and his corpse drifts away, Merritt ratchets up the religiosity, engaging in a philosophical debate with his son as if he's channeling space exploration opponent C.S. Lewis. "The biblical limitations of Man's wanderings are set down as being the four corners of the Earth," he insists. "Not Mars, or Jupiter, or infinity. The question is...what are we--explorers or invaders?" The General submits that the intrusion of man "into the sacred domain of God" constitutes a virtual "act of blasphemy," but Barney doesn't buy it: he sees a divine pattern in the "too perfect to be accidental" coincidence "that at the very time when Man's resources on Earth are reaching an end, Man develops the ability to leave his own world and seek replenishment on other planets," assuring his father that "the universe was put here for Man to conquer." Merritt becomes increasingly skeptical as space fatigue exacerbates his previously-lapsed faith, and finally attempts to sabotage the mission by accelerating the rocket just as it's coming in for its Martian landing. Later, as the other astronauts are exploring the planet, Merritt tries to dump the ship's fuel; when Barney returns, his father fires a pistol at him and the two men struggle, with Barney accidentally killing the General.

Mahoney, who already resents the General's son because he doesn't believe he measures up to the old man, arrives in time to witness Merritt's death, and promises the Captain he'll pay dearly for his actions. Meanwhile, the crew are stuck on Mars as they must wait a year for a launch window. There's no water, and the astronauts' spirits weaken, even though Imoto sows a symbolic seed in the Martian soil. Mahoney pronounces the mission "cursed," while Siegle laments their lack of liquid "on a lousy, dried-up ball in the corner pocket of nowhere." Fortunately for the crew, a decidedly unlikely Christmas snowfall--another too-perfect-to-be-accidental coincidence--provides them with water, and the seed sprouts a flower. There's a climactic earthquake, which the astronauts escape in an emergency liftoff that leaves them bleeding from their ears, mouths, nostrils, and I shudder to think what else. Once they've recovered, Mahoney decides to let bygones be bygones with the knowledge that General Merritt will be remembered historically "for [being] the man who conquered space," rather than a religious fanatic.

The spiritual aspect of the picture places the film squarely in the curious sub-genre of Christian science fiction cinema, a select group which includes such fantastic fare as William A. Wellman's The Next Voice You Hear (1950) and Harry Horner's Red Planet Mars (1952), though Conquest lacks the obsessive anti-Communism of the latter movie. The metaphysics may have been a bit unusual for audiences at the time--indeed, the film's subplot comes, like its meteors, out of nowhere--but it's worth noting that several real-life astronauts have experienced everything from mental breakdowns to mystical awakenings, which, as J.G. Ballard perceived, "[suggests] that more may have been taking place than we realized" in the Apollo program. It's highly improbable that Conquest's Space Corps would place such a zealot in orbit, but the scenarists craft a reasonably absorbing psychological case study nonetheless. Merritt's mental disintegration, in fact, prefigures another sub-genre--that of the Disturbed Astronaut--which found its fullest flowering in William Peter Blatty's cult psychodrama The Ninth Configuration (1980). There's no explicit anti-Christian bias on display here; rather, the General is rendered as well-intentioned but dangerously deluded, and it's strongly implied that Divine Intervention is responsible for the astronauts' unexpectedly Merry Christmas.

A surprisingly pivotal character is that of Sergeant Imoto, who functions as the conscience of the film. Earnestly arguing for the Mars mission by recalling the imperialism of his native land, he admits that Japan's aggression "was bad...but there were reasons....To the Western world at that time, Japan was a fairybook nation [of] little people living in a strange land of rice-paper houses--people who had almost no furniture, who sat on the floor and ate with chopsticks. The quaint houses," he continues, "...were made of paper because there was no other material available. And the winters in Japan are as cold as they are in Boston. And the chopsticks--there was no metal for forks and knives and spoons, but slivers of wood could suffice. So it was with the little people of Japan, little as I am now, because for countless generations we have not been able to produce the food to make us bigger." Imoto predicts that "Japan's yesterday will be the world's tomorrow: too many people and too little land." The Martian expedition is thus a first step towards "provid[ing] the resources the human race will need if they are to survive." When the General, who's plainly affected by this rather dubious speech, assures Imoto that he's "not a little man," it's a sure indication on the filmmakers' part that the West must move on from the atomic incineration of Hiroshima and Nagasaki towards the utopian goal of interstellar exploration--as long, of course, as the United States is in charge of all this resource-gathering expansionism. The multiracial Wheel crew, incidentally, anticipates the cast of Kurt Maetzig's First Spaceship on Venus (1959), David Bradley's 12 to the Moon (1960), and Antonio Margheriti's Assignment Outer Space (1961).

The dumbfounding appearance of the costumed dancers, who cavort on the station's enormous video screen during the astronauts' recreational downtime, temporarily transports Conquest of Space into the realm of the musical--indeed, their pulchritudinous performance is excerpted from Claude Binyon's 1953 comedy Here Come the Girls. The ladies, led by an uncredited Rosemary Clooney, are lovely but ludicrous, though their rendition of "Ali Baba (Be My Baby)" is superior to Woody Woodpecker's contribution to Destination Moon's film-within-a-film. The acting is largely standard for the genre, but Shaughnessy is laughably obnoxious and almost as bad as Foster (who, exactly like Destination's Wesson, "entertains" his fellows with a harmonica). Byron Haskin, who had previously helmed The War of the Worlds and The Naked Jungle for Pal, here directs less vigorously, but there's only so much he can do with the awkward script. He does, however, capture not only the wonder of space travel but the miserable tedium as well of life amongst the stars, which to my knowledge no other film of the time duplicated.

Paramount's 2004 DVD presents Conquest of Space in its original 1.85:1 aspect ratio, and is anamorphically enhanced for widescreen monitors. The eighty-one minute picture contains fourteen chapter stops; unfortunately, there are no extras, not even a blessed trailer. As with many of Haskin's pictures, the Technicolor is vibrant, serving well the palette of cinematographer Lionel Lindon, which also has the unfortunate effect of making the visual effects (by, among others, Ivyl Burks and John P. Fulton) look even more artificial than they must have appeared on theatre screens. Bonestell, for whom a Martian crater was named, provides his usual memorable background art, though he later admitted he never even saw the finished film. Here's that missing trailer.