BRIDE OF THE BEAST: THE MAGICIAN 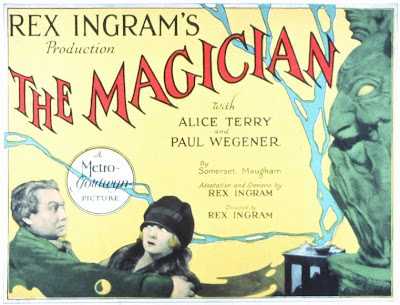 Oh, my stars and garters. I can scarcely believe that Turner Classic Movies recently aired Rex Ingram's 1926 occult chiller, The Magician, but indeed they did, thank Horus. This loose but lavish adaptation of Somerset Maugham's 1908 novel was feared lost for many years, but there it was, flickering on my television screen--a picture I wondered if I would ever see. I fervently hoped that no prominent film person would shuffle off this mortal coil and interrupt the network's regularly scheduled programming with a tribute, and, fortunately, no one did. Maugham's novel was notorious in its day for fictionalizing the misadventures of mountebank mage Aleister Crowley, who appears as Oliver Haddo in the book. The Great Beast himself, masquerading as Haddo, published an essay in Vanity Fair the same year as Maugham's roman a clef, in which he accused the author of plagiarizing, among others, Crowley, H.G. Wells, and Eliphas Levi (whom Crowley pompously claimed to be the reincarnation of in Magick in Theory and Practice). Maugham, for his part, unconvincingly avowed in a later preface to the novel that Haddo "was by no means a portraiture of" the Beast, who pronounced the book "an amusing hotchpot of stolen goods."


Rex Ingram's silent adaptation is less lurid and downbeat than Maugham's novel, but definitely delivers the requisite sulfur. Paul Wegener, best known for starring in and co-directing such Teutonic classics as The Student of Prague (1913) and Der Golem (1920), headlines as Haddo; sadly, this was his single Hollywood venture. Haddo, a "student of medicine" and former asylum inmate, appears as a spectator at a packed Parisian operating theatre where hotshot American surgeon Arthur Burdon (Ivan Petrovich) cures the paralysis of artist Margaret Dauncey (Alice Terry, Ingram's missus), who was pinned to her studio floor by the collapse of a monstrous faun she was sculpting. ("This man Burdon is nothing short of a magician," exclaims one admiring doctor to another, to which Haddo, looking half-crazed, cries "Nonsense! The saving of human life is a comparatively simple matter. On the other hand, the scientific creation of life does indeed call for the powers of a magician.") Naturally, doctor and patient fall in love, but, inconveniently for them, Haddo needs Dauncey's virgin blood to animate the homunculus he's alchemically produced. The betrothed beauty falls under the magician's hypnotic spell, and soon she's hallucinating a pas de deux in the underworld with a nearly nude satyr (Folies Bergere dancer and painter Hubert Stowitts). The sculptress marries Haddo instead of Burdon, and next the entranced bride is winning big at the gambling tables of Monte Carlo, presumably because her husband is unable to conjure money out of thin air. The newlyweds hole up at Haddo's mountaintop stronghold, which comes complete with regulation dwarf assistant (Henry Wilson), and the necromancer very nearly sacrifices Dauncey before Burdon and her uncle, Dr. Porhoet (Firmin Gemier), storm the tower and Haddo maladroitly tumbles into his furnace.

This is deliciously strange wine. John F. Seitz, who also photographed Billy Wilder's noir masterpieces Double Indemnity (1944) and Sunset Blvd. (1950), composes stunning Expressionist images, from the amazing sequence of Dauncey's statue self-destructing (as its head moves, it seems as if the sculpture's come magically alive) to the menacing shadows of Haddo's tower, which plainly influenced James Whale's vision for Universal's Frankenstein (1931) and its first sequel, Bride of Frankenstein (1935). Henri Menessier's art direction is similarly spectacular, while Dauncey's enormous faun--constructed by Paul Barde, who cameos as a bearded sculptor--is so magnificent it's somewhat depressing to watch it collapse. (What a shame, however, that we never see Haddo's artificial creature; the book's description of his sundry homunculi anticipates the later abominations of H.P. Lovecraft.) Ingram directs his cast to underplay their roles, which throws the flamboyance of Wegener's diabolism into high relief; the actor's so intense it's comical--he rules the picture with, if not an iron, then at least a ham fist. ("He looks as if he had stepped out of a melodrama," Burdon comments to Dauncey of the caped conjurer.) Wegener is a veritable wonder to observe, showing off at a fair by allowing a snake charmer's viper to bite him and causing the wound to vanish, wearing his hair in horns in the satyr sequence, and, in the climax, advancing upon the camera like a demented thing as he prepares to remove his bound bride's pounding heart.

In Maugham's novel, Dauncey dies by degrees, and her spinster friend Susie Boyd plays a more prominent role, but Ingram's script relegates Boyd's portrayer, Gladys Haven, to the background. (She does, however, have a comical bit in the opening studio section where she changes the title of the vaguely cubist painting she's completed from "Sunrise on the Seine" to "Sunset on the Seine"--it's a mild dig at the Modernism that was then discombobulating the art scene.) The underworld interlude is an miracle of erotic mania, with Pan playing his pipes while splendid nymphs cavort around a fiery cauldron, and purportedly scandalized the Nice locals where the film was shot.

Ingram, after directing Rudolph Valentino to stardom in The Four Horsemen of the Apocalypse (1921), also helmed such swashbucklers as The Prisoner of Zenda (1922) and Scaramouche (1923). The Magician, unlike those epics, was not a commercial success, and he would make only three more features. (The director, who operated his own production company, so disliked MGM studio head Louis B. Mayer, in fact, that the film is credited as "a Metro Goldwyn picture.") Unimpressed with talkies, Ingram returned to his earlier love of sculpting, and later converted to Islam. It's worth noting that his assistant director here was none other than the soon-to-be-legendary English filmmaker, Michael Powell (Black Narcissus [1947], The Red Shoes [1948]), who also appears, uncredited, as the man with a balloon in the snake charmer sequence.

According to Nikolas Schreck in The Satanic Screen, Maugham, "in typically malicious fashion...let it be known that he disliked Ingram's adaptation," while the director retorted "that he had done the best he could with such poor material." And long after the author first encountered Crowley in a Parisian restaurant, he received a telegram from the perpetually destitute Beast requesting that he send him twenty-five pounds. "I did not do so," Maugham reported with a certain grim satisfaction, "and he lived on for many disgraceful years."

The Magician, both book and film, mark the first fictional appearances of Awful Aleister, who also popped up as idealized versions of himself in such Crowley novels as Diary of a Drug Fiend and Moonchild (wherein he savagely, hilariously lampooned his fellow Golden Dawn members MacGregor Mathers and William Butler Yeats). Later he would serve as the model for such celluloid sorcerers as Boris Karloff's Hjalmar Poelzig (The Black Cat [1934]), Niall MacGinnis' Julian Karswell (Night of the Demon [1957; U.S. release, Curse of the Demon]), and Charles Gray's Mocata (The Devil Rides Out [1968; U.S. release, The Devil's Bride]); he's also the obvious inspiration for Mark Strong's Lord Henry Blackwood in 2009's Sherlock Holmes. It's curious, however, that no one has--yet--mounted a serious biopic of this infamous rascal sage.

TCM's restored-and-tinted fullscreen print of this seventy-nine-minute thriller would flatter the Eye of Horus. Robert Israel's score supplies perfect accompaniment, incorporating music from Mussorgsky's "A Night on Bald Mountain" and, over the titles, the Second Act of Tchaikovksy's "Swan Lake." The latter piece should certainly be familiar to genre buffs, as it also plays over the opening of Tod Browning's Dracula (1931). Maugham's novel remains in print, and, though it's usually considered one of his minor works, is highly recommended. Hopefully, if the network plays its (Tarot?) cards right, we'll see a home video release of The Magician sooner rather than later. 93 Skidoo!

Schreck, Nikolas. The Satanic Screen: An Illustrated History of the Devil in Cinema 1896-1999. London: Creation Books, 2001.