PUCKER UP: KISS OF THE TARANTULA 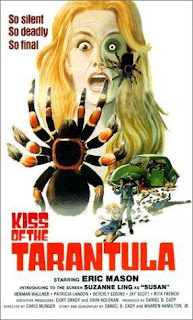 The Nineteen Seventies were a fairly productive decade for spiders crawling across cinema screens.  Our eight-legged  friends emerged both normal and giant-sized from black holes that somehow found their way to Wisconsin (Bill Rebane's Volkswagen-propelled The Giant Spider Invasion [1975]), and covered an entire Arizona town with their sticky stuff in John "Bud" Cardos' Kingdom of the Spiders (1977), but it's Chris Munger's Georgia-lensed Kiss of the Tarantula (1976) that established a psychic link between the creepy critters and their master--or, in the case of this film, mistress.  The picture's obvious antecedents are Daniel Mann's Willard (1971), Phil Karlson's Ben sequel (1972), and William Grefe's same-year Stanley; like those rat and snake operas, the thematic shift here is from ecological to personal revenge.

Susan Bradley (Suzanna Ling in her sole film appearance) is the strange-but-lovely daughter of mortician John (Herman Wallner, a Victor French surrogate), whose police chief brother Walter (Eric Mason, apparently the only actor with other pictures to his credit) is planning a run for state Attorney General.  Uncle Walter, when he was a mere flatfoot, was the secret lover of John's shrewish wife Martha (Beverly Eddins), but the paramours' plans to murder John and move her out of the family mortuary she so despised were sabotaged by Susan's unleashing one of her colorful pet tarantulas on Mommy when Daddy's Girl discovered the plot.  Susan never said anything to anybody, however, so everyone accepted the story that Martha expired from a heart attack--the spiders, you see, crawl all over their victims but never bite them, although they certainly scare them into early graves.  Now Susan's in the flower of young womanhood, while Uncle Walter's incestuously licking his chops.  (Father John, of course, is oblivious to everything.)

Susan is considered peculiar by her peers because she lives in a mortuary--and a falling-apart one, at that; the house, which was also utilized for the climax of John Wayne and Ray Kellogg's The Green Berets (1968), sports several gaping cracks and holes in its ceilings and walls.  While her father's away one evening, several neighborhood goofballs break into the house to borrow a casket for Halloween hijinks.  Susan catches them, and the men decide to have a little fun with the fetching lass.  They drag her to the basement, accidentally killing one of her pets by dropping its glass cage.  This understandably spoils their erotic mood and the punks guiltily depart, while the distraught Susan plots vengeance, unleashing her arachnid familiars on two of the men and their girlfriends while the couples are necking in a car at a drive-in.  She simply cracks opens the passenger door--conveniently, no one else, either inside this particular vehicle or any other, notices her actions--and the mayhem begins.

Unfortunately for Susan, two of her friends, Tracy (Linda Spatz) and Joan (Rita French), are among the victims; sole survivor Joan is now a weepy basket case.  (The other three die from such ridiculous injuries as slicing their necks on broken window glass and being crushed between a car door and drive-in speakers.  Allow me to reiterate that none of this idiocy is observed by anyone until after Susan has regathered her pets and the theatre empties.)  A distraught Susan visits her bugged-out friend in the hospital, where she's overheard telling her "I never wanted to hurt you, but they made me do it" while being eavesdropped on by nosy Nancy Drury (Patricia Landon), who immediately informs Bo Richards (Jay Scott), the ringleader of the casket gang.  Bo apologizes to Susan for the men's mischief and asks her for a date, to which she surprisingly agrees.  She doesn't expect to be taken to the drive-in, however--especially to see a thriller ("Everything just seems so unhappy now.  Everything is just so down....That's why I like happy endings")--and, after Bo accuses her of killing his friends, she bolts from the vehicle.  The next day, Susan unleashes her spiders on him while he's caulking inside a ventilation duct at a building under construction.

People are dying right and left, but authorities are baffled--at least until Uncle Walter retrieves a tarantula leg from Bo's corpse.  Next he's approached by Nancy, who urges him to take action against Susan.  Walter confronts his niece, but assures her he can fix everything if he has her "cooperation," nudge-nudge-wink-wink.  He kisses the repulsed Susan, who kicks him out of her house.  The sorry scene is observed by Nancy, spying on the pair.  Walter chases and chokes Miss Nosy to death, then pretends to investigate the killing.  Nancy's corpse is now in a casket at the mortuary, whose business is definitely booming; when Walter returns to tell Susan what he's done and obtain from her more cooperation ("We have to look out for each other," he whispers lustily), she pushes him down the stairs, which paralyzes the fiend below the neck.  Finally, in a sequence so comically protracted that we forget all about tarantulas, Susan removes Nancy's body from the coffin with a special hoist, uses the same device to place her weakly protesting uncle in the casket, and puts Nancy back where she found her, sealing both the coffin and Uncle Walter's fate.  The picture ends as it began, with Susan smiling into the camera as she admires a spider.

Warren Hamilton, Jr.'s screenplay, from a story by producer Daniel Cady (who also wrote and produced the prison zombie anti-classic Garden of the Dead [1972]), is absurd but adequate.  Spiders here symbolize the dark side of female sexuality, amply manifested by the creatures' lethal appearances in womblike car and ventilation duct.  Susan herself seems reasonably open to physical love--she even has a perfunctory boyfriend who quickly disappears, as if forgotten, from the movie--but sex in this picture is a veritable killing ground; Susan's deepest emotional connection is with her pets, anyway, and it's obviously all she really needs.  Munger's direction only truly comes alive during the drive-in and duct sequences, enhanced by Henning Schellerup's otherwise mundane cinematography, which viscerally communicates the claustrophobia of the enclosed spaces in which the various characters find themselves trapped.

VCI's anamorphically-enhanced 1.85:1 version of Kiss of the Tarantula is available singly, as half of a 70s Drive-In Horror Double Feature with Curtis Harrington's superior Ruby (1977), and as the first film in a three-disc Scream Pack (whose ungrammatical ballyhoo on the keepcase cover concludes "...If You Can Still Breath!").  As with a fair number of VCI titles--certainly the pictures in this collection--the label's print is in as rough a shape as the Bradleys' house, with spidery speckles aplenty.  The eighty-four minute film, which is copyrighted 1974, contains eighteen chapter stops, as well as trailers for the other two S.F. Brownrigg-directed  Scream Pack regional obscurities, Don't Look in the Basement (1972) and Don't Open the Door (1975), plus John Llewellyn Moxey's marvelous City of the Dead (1960, with video-generated titles replacing the original U.S. Horror Hotel retitling), and Arthur Crabtree and Herman Cohen's Horrors of the Black Museum (1959).  The picture's amusing menu screen features several computer-generated tarantulas crawling across a web.  Sinister Cinema once offered Kiss of the Tarantula in its extensive catalog, but I've not seen this edition, which appears to be deleted.  Here's the film's original trailer.  Happy Halloween!

Labels: Kiss of the Tarantula 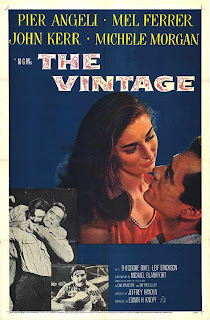 Jeffrey Hayden's The Vintage (1957) is the type of picture where the American and Italian players make no effort whatsoever at passing themselves off as convincing Italian, French, and Spanish characters, and the authentic French actress doesn't particularly seem all that Gallic.  It's the disintoxicating tale of two Italian brothers, on the lam from authorities, who cross into southern France looking to find work by harvesting grapes.  Hot-tempered, switchblade-wielding Ernesto Barandero (John Kerr) is wanted for killing a man who was beating a woman, while older Giancarlo (Mel Ferrer) is along to keep Ernesto out of further mischief.  The siblings, despite their conspicuous lack of hand calluses and work cards, are reluctantly employed by vineyard owner Louis Morel (Leif Erickson, Kerr's macho headmaster nemesis in Vincente Minelli's camp classic Tea and Sympathy [1955]) the morning after they safely deliver the dead drunk Morel to his farmhouse.  (He's passed out during a ferocious rainstorm after beseeching God not to destroy his crops.)  Ernesto and Morel's neglected wife Leone (Michele Morgan) are drawn to one another, with lovesick Ernesto even carving her portrait in a woodblock, while Leone's teenaged sister Lucienne (Pier Angeli), who's supposedly engaged to jealous Etienne (Jack Mullaney), is attracted to the more mature Giancarlo; this, of course, is the opposite of what we expect from the scenario, and it is, I fear, The Vintage's single surprise.

Morel spends most of his time worrying about hail damage and complaining about his grape pickers, while the fuzz, hindered by sympathetic guitar-wielding Spanish foreman Eduardo Uribari (Theodore Bikel) and his co-workers, search for the brothers.  Complications arise when Morel discovers the whittled head, which Giancarlo has accidentally dropped after taking it away from his brother in a near-fight.  Giancarlo is falsely accused of stealing chickens--yes, dear reader, chickens--and locked in a barn when he attempts to retrieve the sculpture; the real poultry snatcher, former family patriarch Uncle Ton Ton (Joe Verdi), has been trading the creatures for Eduardo's chocolate. Lucienne confesses her love to the imprisoned Giancarlo, Morel gets slapped by his wife after accusing her of infidelity--she's plainly delighted to be desired again--and Giancarlo is released in time to watch his brother get fatally shot in the back by the police when Ernesto runs from them. Morel finally begins to appreciate his long-suffering spouse; Giancarlo--about whom, apparently, the authorities no longer care--is free to begin a new life with Lucienne.  C'est tout.

The oddball cast's performances are generally indifferent, with the only amusing work coming from Erickson, from whom Kerr seemingly still cannot get away; in a ludicrous attempt to frencify the actor, the filmmakers hide his mug behind a bushy moustache.  The Vintage's primary interest is in its reunion of these Tea and Sympathy stars, and essentially functions as a footnote to the earlier film.  Morgan is beautiful, but hasn't here the charisma of (let's say) Deborah Kerr.  Former blacklistee Michael Blankfort's adaptation of Ursula Keir's novel lacks body, while television man Hayden's direction lacks finish.  The Vintage's only real flavor is furnished by four-time Oscar winner Joseph Rutenberg's cinematography, which exquisitely captures the natural beauty of the region, and David Raskin's exultant score.  The film isn't bad per se; it just isn't much of anything, and I could scarcely remember enough of it to write this post.  The presence of marauding zombies, a la Jean Rollin's marvelous Les Raisins de la Mort (1978), would at least have injected a little life into the proceedings, preferably with Brigitte Lahaie in the Leone role.

The ninety-two minute melodrama is, not surprisingly, unavailable on home video, but Turner Classic Movies occasionally airs a lovely print of this picture in its original 2.35:1 aspect ratio.  The Cinemascope colors are positively vibrant.  Here's the theatrical trailer.  Emotions naked as the earth, indeed!