NONE CAME BACK: ROCKETSHIP X-M 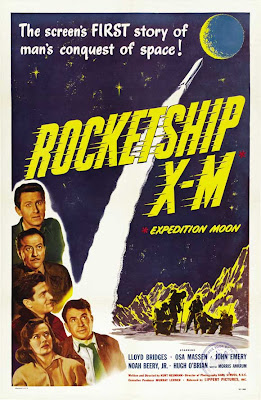 After the commercial success of producer George Pal's Destination Moon (1950), filmmakers quickly set their sights on Mars. Foremost among them was German emigre Kurt Neumann, whose same-year feature, Rocketship X-M, was shot in a then-record time of three weeks after he learned of Pal's lunar project. Neumann's independent effort actually beat Destination Moon into theatres by four months, and--despite its shoestring budget and amusingly risible dialogue--endures as one of the most daring, and downbeat, films of its era.


Doctor Karl Eckstrom (John Emery) leads a four-man, one woman crew on what begins as a trip to Earth's nearest satellite (X-M stands for Expedition Moon), but ends as a tragic visit to the Red Planet. This plot contrivance allowed Neumann to forgo costly construction of a soundstage moon-set in favor of simply shooting the picture in the Mojave Desert near Palm Springs. The astronauts--Eckstrom, pilot Colonel Floyd Graham (Lloyd Bridges), navigator Harry Chamberlain (Hugh O'Brian), engineer Major William Corrigan (Noah Beery, Jr.), and chemist Doctor Lisa Van Horn (Osa Massen), who's done "pioneering research with monatomic hydrogen"--are endangered when their jettisoned tail section nearly smashes into the second stage of the craft (flagrantly violating the law of physics), and it further transpires that they've used too much velocity to escape Earth's orbit. As a result, the rocket drifts while Graham attempts to woo Van Horn by quoting Rudyard Kipling's "Tomlinson" and making romantic moon chatter.


Hardline feminists will likely frown upon the film's early dialogue, which is rife with the sort of talk that nowadays risks the wrath of the Gender Police. "Unless you look like a test tube or a chemical formula," Graham informs a reporter of Van Horn before the X-M lifts off at White Sands, "you haven't got a chance" with the scientist. Later, when the lovely chemist wonders aloud if Graham believes "that women should only cook, and sew, and bear children," the smitten man responds, "Isn't that enough? There's such a thing as going overboard in the other direction, too, you know." Then, while the rocket is temporarily stalled, Van Horn argues with the professor over his (correct) fuel mixture calculations; she apologizes and he asks, "For what? For momentarily being a woman?"

Such politically-incorrect banter is mercifully put to an end by the occurrence of a meteor shower, the components of which resemble giant cracker jacks. The X-M escapes unscathed, and the astronauts finally break free of their drift, but are rendered unconscious by g-forces. Earth's orbital velocity, added to the rocket's own power, causes the craft to zoom completely off-course into deep space. "So we made a little detour," Graham remarks flippantly after they recover. "Now we've gotta double back to that last road sign." The crew discover to their astonishment that they're in fact heading towards Mars. Eckstrom muses that "there are times when a mere scientist has gone as far as he can. When he must pause and observe respectfully while something infinitely greater assumes control. I believe this is one of those times." The team decides to land, just as a rainstorm--of all things--erupts.

The Martian sequence was tinted red for its original release and certainly evokes the Roman god of war. Our astronauts, wearing oxygen masks and mountaineering gear in lieu of unflattering pressure suits, explore the planet with pistol and rifle while Ferde Grofe's theremin wails. Soon they stumble upon the radioactive remains of a city. "The mind of man, wherever you encounter it--Earth or Mars--the finest attainments of human intellect--always diverted to self-destruction," Eckstrom somberly observes. The crew are attacked by murderous Stone Age-type mutants, who quickly whittle them down to a trio. Graham, Van Horn and the dying Chamberlain flee to their ship; they take off immediately, but--as was Luna's predicament in Destination Moon--there's not enough fuel for them to land. Via short-wave, they warn their fellows of what they have experienced. As the rocket plummets over Nova Scotia, Graham and Van Horn bravely embrace. They are killed in the crash, a climax that must have been profoundly disturbing for 1950--indeed, the film's original title was None Came Back, which Neumann nixed so as not to spoil the ending.

In a brief epilogue, mission director Doctor Ralph Fleming (Morris Ankrum, who earlier comments on establishing a moon base "to control world peace") assures the press that the space mission was not a failure, that much knowledge (including "information which may well mean the salvation of our world") was gained, and that "tomorrow, we start construction on R-X-M II." The denouement evinces the essential optimism at the base of all tragedy, but it was a point of which audiences could justifiably feel dubious.

It was not revealed until several years ago that blacklisted scenarist Dalton Trumbo, and not Herr Neumann, wrote the screenplay--in fact, the erstwhile Communist Party card-carrier penned several uncredited pictures when he wasn't being fronted by Millard Kaufman (Gun Crazy [1950]), Guy Endore (He Ran All the Way [1951]), or Ben Perry (Terror in a Texas Town [1958]). Trumbo's script carries a potent anti-war sting in its tail, as one would expect from the author of Johnny Got His Gun. The film openly agonizes about the genetic effects of radiation, reflecting post-Hiroshima and -Nagasaki anxieties, and is the first genre feature to broach the subject, predating even Arch Oboler's Five (1951).

Of course, Rocketship X-M is loaded with scientific nonsense (e.g., Mars' gravity is thirty-eight percent of Earth's, and not, as the picture claims, fifty percent; also, the distance between the moon and the Red Planet is over thirty-four million miles, rendering a Martian landing completely out of the question), but logic is seldom the strong suit of space opera; indeed, it often gets in the way of the story. Neumann's film celebrates the heroism of the generation that had just defeated the Axis Powers and would move steadily towards the stars, while at the same time emphasizing that technology far too often outdistances our humanity: the mechanization of the soul is the principal risk of modernity, and the rest is radioactive rubble.

In 1977, film distributor Wade Williams replaced--not without controversy--the picture's V2 rocket footage with several model and matte shots courtesy of future Oscar winner Dennis Muren and other George Lucas confederates. The new material is well-integrated, however, and Williams' makeover has become Rocketship X-M's standard version, as Neumann's original cut has been withdrawn. Theobold Holsopple's production design and art direction, in conjunction with Jack Rabin's special photographic effects, retain the power to impress, in spite of such hilarious goofs as rocket launch transparency (through which the pad and other props can plainly be perceived) and sideways clouds glimpsed outside portholes. Karl Struss' camerawork, particularly in the White Sands segments, is dramatically noirish; he would reteam with the director six times, most notably for Kronos (1957) and The Fly (1958). Image Entertainment's 2000 fullscreen "50th Anniversary" disc, part of the label's Williams Collection, is in excellent shape, and the seventy-seven-minute picture, sporting appropriately Martian sepia tints, has a dozen chapter stops. The only extra is the original trailer, in considerably coarser shape, which contains the V2 footage.