THE PLEASURES OF NYOKA: JUNGLE GIRL 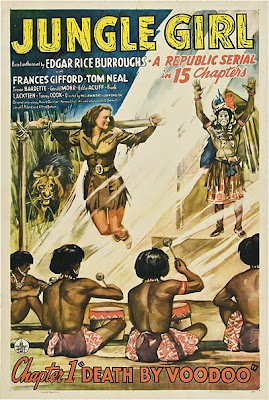 William Witney and John English's fifteen-chapter Republic serial Jungle Girl (1941) is the type of politically incorrect entertainment Hollywood studios don't make any more, if they know what's good for them. Allegedly based on Edgar Rice Burroughs' Cambodia-set 1932 novel--originally titled The Land of Hidden Men--the picture in fact has nearly nothing in common with its source material, other than a jungle backdrop. It's the kind of movie where the African natives are plainly Caucasian actors in ludicrously comical blackface and Afro wigs, and contains dialogue guaranteed to elicit multiculturalist conniption fits (e.g., "The rest of you can stay here," one character chastises his confederates in the midst of a tribal siege, "but I'm not going to see a white man thrown to the savages." For that matter, Jungle Girl's memorable tagline, "Mistress of an Empire of Savages and Beasts," probably wouldn't pass muster with the multiculties, either). The serial is a rip-roaring relic of its time, racially insensitive and hang the consequences. It's a window on a lost cinematic world, where the Saturday afternoon matinee reigned supreme. I enjoyed every cliffhanging moment, and wish I had a combination-riding-crop-and-blow-gun like Slick Latimer's.

Frances Gifford is Nyoka (Swahili for "snake"), who lives with her father, Dr. John Meredith (Trevor Bardette), among the Masamba tribe. Unbeknownst to her, Meredith has an evil twin, Bradley (also Bardette), an ex-convict who's supposedly dying in a nearby outpost, and who inspired the good doctor's self-imposed exile. Meredith reluctantly agrees to see his brother, but naturally it's all a ruse and he's murdered by Bradley's oleagenous partner in crime, Latimer (Gerald Mohr), so that Bradley can assume his identity after the doctor refuses to participate in his sibling's latest scheme. (Bradley also pretends to be recovering from a head injury, which conveniently explains his general confusion about medicine and other important things.) Latimer and the iniquitous impersonator are flown back to the village by studly Jack Stanton (pencil-mustachioed Tom Neal), who's unaware of the villains' plot to loot the natives' diamond cache in the mysterious Caves of Nakros. The twin and his fellow miscreants contrive with the tribe's incompetent witch doctor, Shamba (Frank Lackteen)--who resents Meredith's superior Western juju--to get their mitts on the stones, which are guarded by "lionmen" (sentries in skins). Shamba also schemes to claim the Lion Goddess amulet which Chief Lutembi (Al Kikume) gave to the doctor after Meredith saved the leader's life, thus allowing Shamba to control the tribe. Nyoka and Stanton must endure everything from flamepits to avalanches to set matters aright, and the couple are aided in their endeavors by Nyoka's loyal lad Wakimbu the Wild Boy (Tommy Cook) and Stanton's sidekick Curly Rogers (Eddie Acuff, the brother of country crooner Roy Acuff), an amateur ventriloquist whose hobby comes in handy outwitting the lionmen.

Jungle Girl's pacing is brisk, its melodramatics florid with maximum ooga-booga. The California location shooting never convinces us we're anywhere near Africa, but that's part of the picture's primitive charm. A perpetual limitation of the serial format, of course, is its blatant resort to cheating at the beginning of chapters to resolve the climactic predicaments of previous installments, as, for example, when a hero is shown plunging in his automobile off a cliff at the conclusion of one chapter, but somehow manages to leap from the vehicle to safety in the following week's adventure. Chapter Nine is a prime specimen of this chicanery, but the remainder of the serial (composed by no less than six screenwriters) is substantially less flagrant, and practically every installment is pleasingly packed with mid-chapter perils. The stuntwork by Yakima Canutt, Helen Thurston, and David Sharpe is outstanding, with Thurston's somersaults undoubtedly inspiring a generation of girlhood injuries.

Gifford, a mere nineteen years old at the time of this production, makes a fetching heroine; sensational in form-fitting leopardskin dress, she's plucky and resourceful, even if she does shriek when a man in a gorilla suit gets too close in Chapter Ten. (The actress later helped Johnny Weismuller defeat Nazi paratroopers in one of the best RKO vine-swingers, Tarzan Triumphs [1943].) Neal, best remembered for his lead in Edgar G. Ulmer's nightmarish shoestring noir Detour (1945), provides the requisite machismo, casually digging a slug from his shoulder in Chapter Fourteen as if it's all in a day's work. Both performers, as the disc's credits supplements detail, fared poorly offscreen: Gifford's injuries in a 1948 car crash precipitated an emotional breakdown, leading to a two-decades-long stay at several sanitariums, while the hot-tempered Neal effectively sabotaged his career by cracking the skull of actor Franchot Tone in a quarrel over actress Barbara Payton; he later killed his (Neal's) wife and served several years in Wire City. Mohr, an ersatz Humphrey Bogart if there ever was one, is an eminently hissable but well-dressed antagonist who's never without his stylish cravat, no matter how high the temperature climbs. Bony Bardette is simply marvelous: innocently idealistic as the doctor, alternately ruthless and obsequious as his crooked brother (especially when he's at Latimer's mercy--it's amazing how unglued the rascal becomes when stranded amongst the Masambans). Kay Aldridge replaced Gifford in the 1942 sequel, Perils of Nyoka, in which our mistress searches for the Golden Tablets of Hippocrates; the character later appeared, off and on, in comic strip form.

VCI's 2001 DVD offers Jungle Girl on two discs: ten installments on the first platter, the remaining five on the second. The second disc additionally contains an astonishing twenty-four trailers for sundry other serials. VCI's print is taken from England's National Film and Television Archive, where the picture was released, a bewilderingly belated eight years later, by British Lion Film Corporation. Violent footage was excised from chapters Ten, Eleven, and Fifteen of British Lion's version, but has been restored for this presentation; alas, the final chapter's shots of Latimer's henchmen with spears in their backs are still missing, while Latimer's fatal plunge from Stanton's plane remains incomplete, cutting away before his dummy hits the ground. Frame damage in several shots is obscured by the utilization of artificially slowed motion, but for the most part the two-hundred-and-sixty-seven-minute fullscreen print is in excellent condition. The set additionally contains several lobbycard and photo reproductions, but, regrettably, no riding crop.
Posted by James Pagan at 7:57 AM